A Summary and Critique of
Daniel Kahneman’s
Thinking, Fast and Slow

PART I. A SUMMARY OF DANIEL KAHNEMAN’S THINKING, FAST AND SLOW

In order to switch between pages of Part  I. A Summary of Kahneman‘s Thinking, Fast and Slow, please use tabs located beneath this message.

The principal messages of Kahneman’s book are summarized in the following sections.

Kahneman’s book is organized around two models of thinking: System 1 and System 2. In accordance with the title of the book, “thinking fast” describes System 1, and “thinking slow” describes System 2. System 1 is unconscious, automatic, intuitive and effortless. It utilizes associations and resemblances in order to provide quick answers to questions. System 1 is naive, susceptible, non-statistical and empirical. System 2 is conscious, effortful, controlled, slow, careful, statistical and suspicious. System 2 is also “lazy” because it is costly to use (in terms of energy and time).

Kahneman argues that System 1 describes our “normal” decision making, and System 2 becomes engaged in decision making only when circumstances require its involvement. Many of the real decisions that people make in their lives, including some important and far-reaching decisions, are generated by System 1. System 1 can lead to right answers and wonderful inspirations, yet, it can also lead to systematic errors.

Kahneman points out that the domains of System 1 and System 2 are different for different people. They depend on people’s knowledge and experience, and they can change as people acquire more experience and expertise. For example, for many people, calculating the product of 20 × 20 is a very simple task that can be effortlessly performed by System 1. Yet, for some people this task will require activation of System 2. For many people, screwing in a light bulb is a task for System 1, but for some people this task has to be done by the effortful and conscious System 2.

Although System 1 can make mistakes because of its speed and intuitive method, System 2 is not perfect neither. People can solve problems incorrectly whenever they do not think about them in the right way.

Kahneman’s book describes research o biases and heuristics conducted by Kahneman and Tversky. A heuristic is a mental shortcut that allows people to solve problems and make judgments quickly and efficiently. Heuristics comprise intuitive judgments, stereotyping or a rule of thumb, as well as educated guesses. They are applied in the thinking process in order to shorten time spent on problem solving and decision making.

Heuristics can be helpful in many circumstances; however, they may lead to biases. Kahneman and Tversky’s research demonstrated that people often make biased predictions and estimates when they use heuristics to solve statistical problems.

Kahneman and Tversky identified two categories of heuristics. One category is related to anchoring. It involves heuristics that allow people to guess answers to questions when they do not have a good idea about the correct answers. In the process, people’s answers can be influenced by irrelevant data or conditions..

For example, in an experiment, a wheel of fortune is marked from 0 to 100, and it is set up in a way that it can stop only at 10 or 65. After spinning the wheel, the experiment participants have to write down the number at which it stopped. Then, they have to tell if the percentage of African member nations of the UN is greater or less than the number that they just wrote down. The average guess, which was 25 percent, was made by those participants who observed the wheel to stop at 10. For the participants who recorded the wheel to stop at 65, the average guess was 45 percent. In Kahneman’s opinion, anchoring is an example of System 1 trying to make these kinds of quick estimating decisions.

The second category of heuristics deals with statistical problems. These kinds of problems arise when people have all the necessary information, but they use it in the wrong way. Errors can arise when people do not consider properly all available information. The “Linda” experiment is a good example of the use of such heuristics. In this experiment, participants are given Linda’s description: Linda is 31 years old. She majored in philosophy. She is single, opinionated and bright. When Linda was a student, she participated in anti-nuclear demonstrations. She was also very much concerned with issues of social justice and discrimination. The participants in the experiment have to rank different scenarios in order of their probability: 1) Linda is an elementary school teacher; 2) Linda is active in the feminist movement; 3) Linda is a bank teller; 4) Linda is an insurance salesperson; 5) Linda is a bank teller also active in the feminist movement.

Developed by Kahneman and Tversky, the Prospect Theory relies on four essential assumptions:

The presentation of a problem can impact the way people evaluate it. Kahneman identifies the importance of context in forming mental pictures of problems in his discussion of the WYSIATI principle (i.e., “what you see is all there is”).

Kahneman’s conceptual studies have formed the foundation for several empirical discoveries in hedonic psychology that he describes in his book. For example, even though French mothers spend less time with their children than American mothers, they enjoy the time spent with children more; women who live by themselves appear to enjoy the same level of well-being as those women who live with a mate; headaches make the poor feel unhappier than other people. 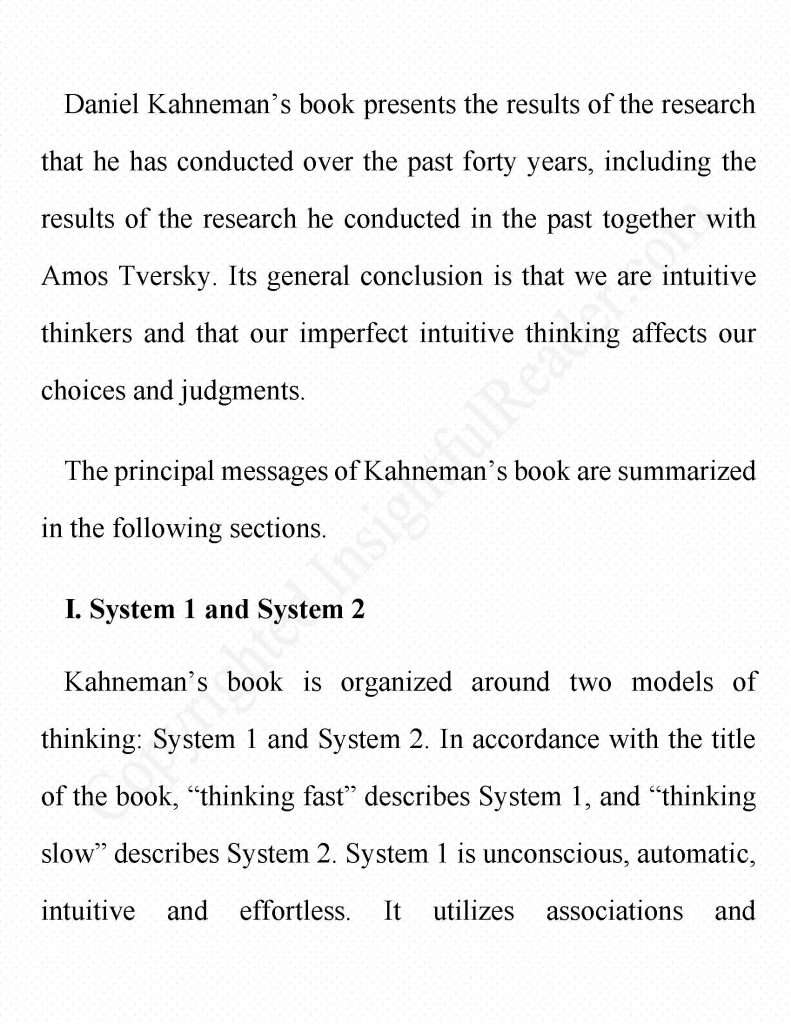 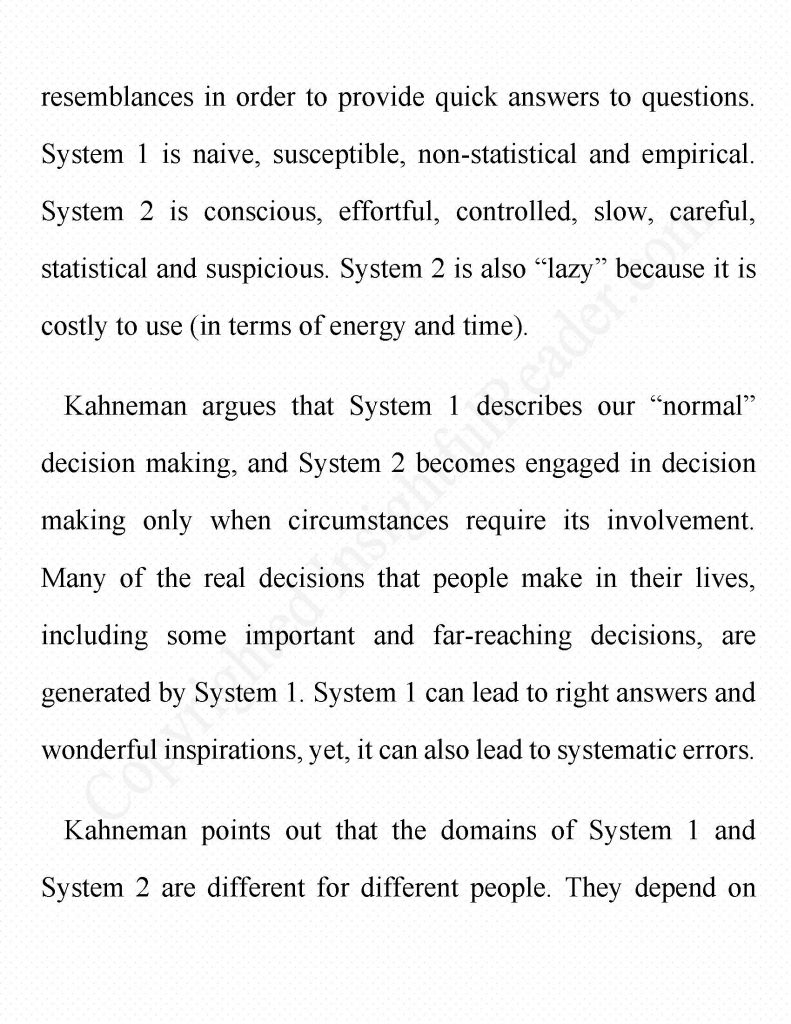 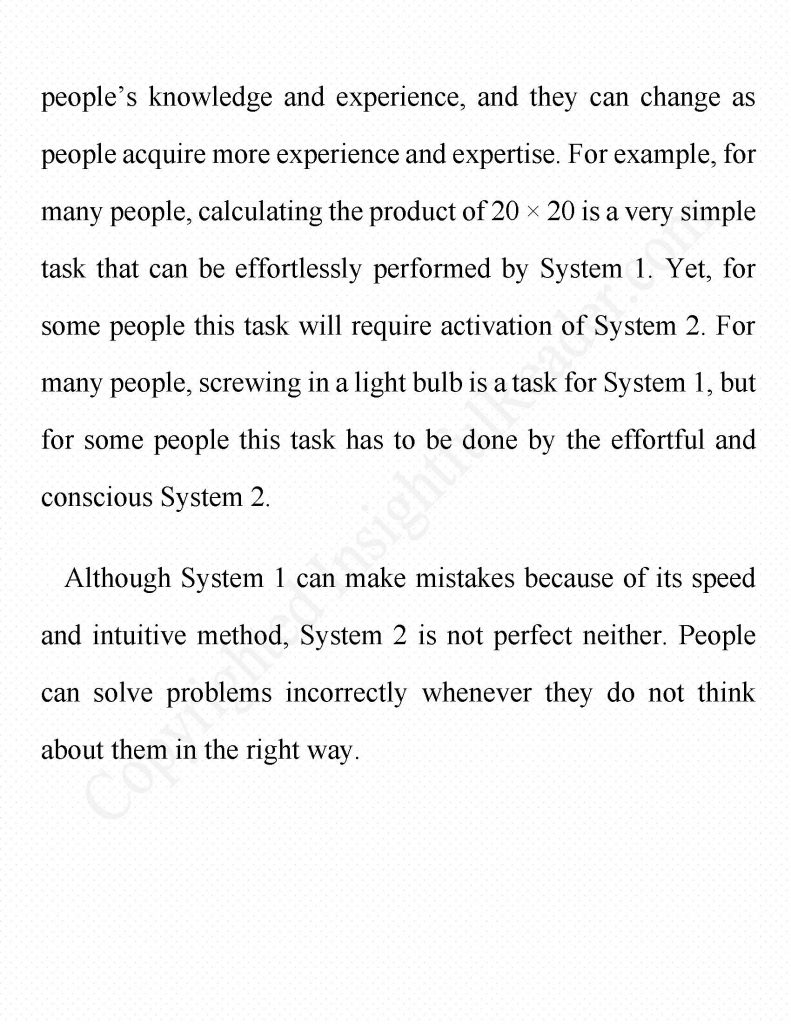 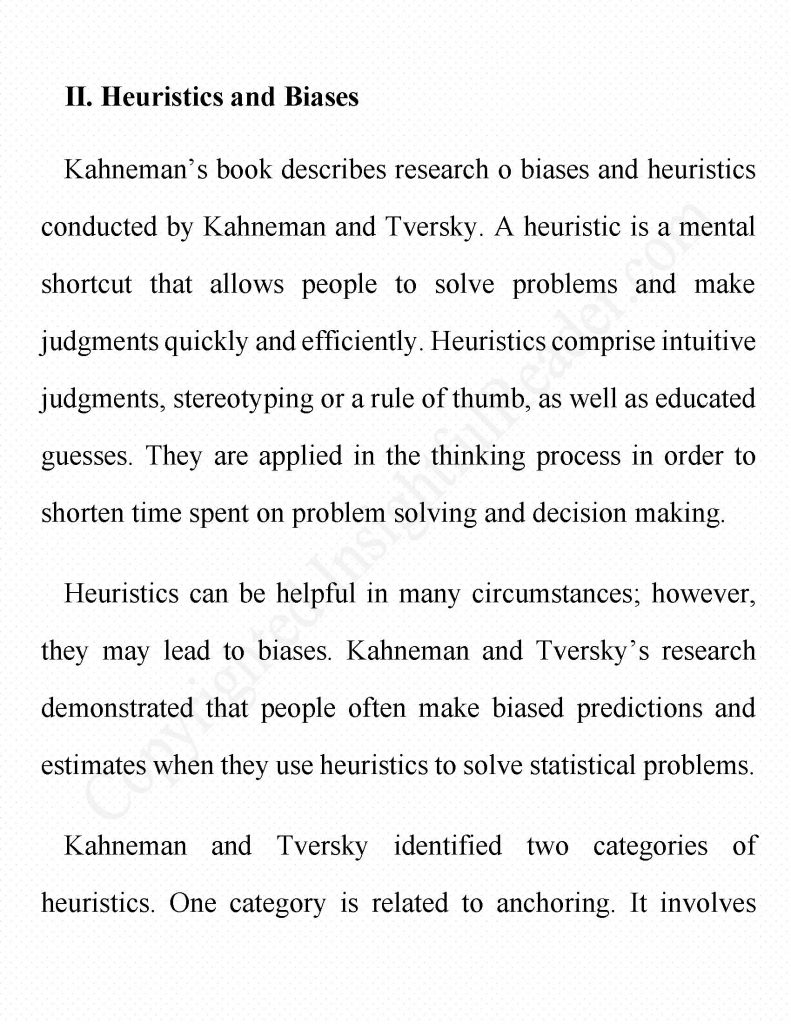 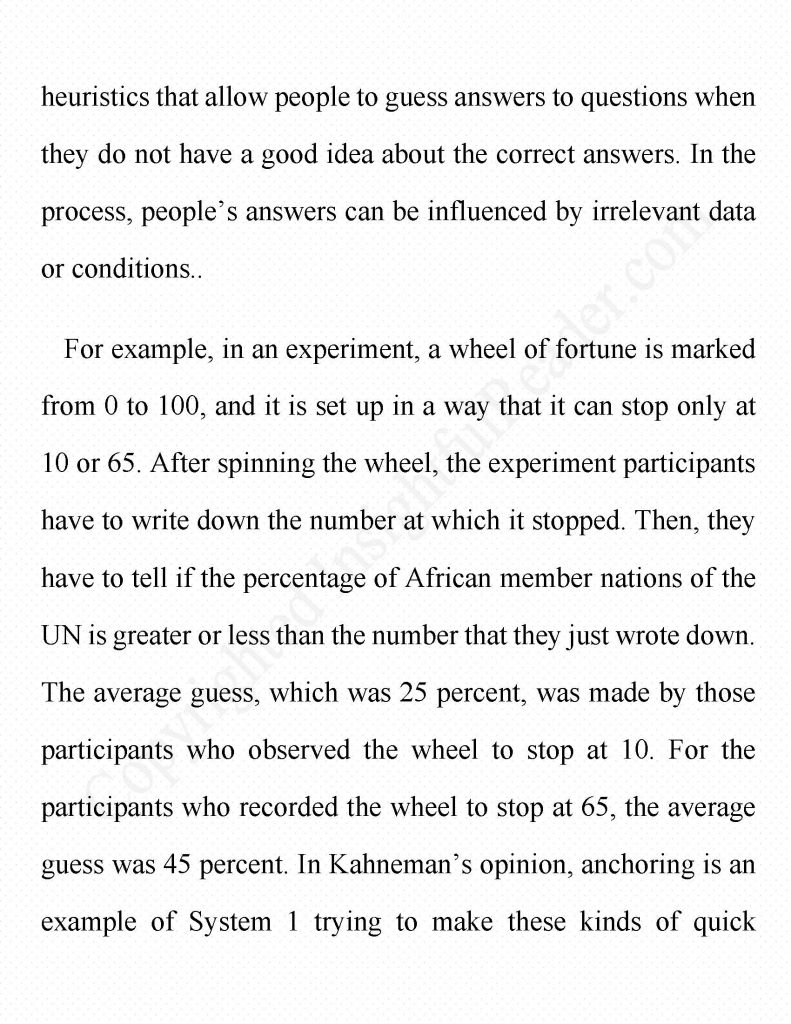 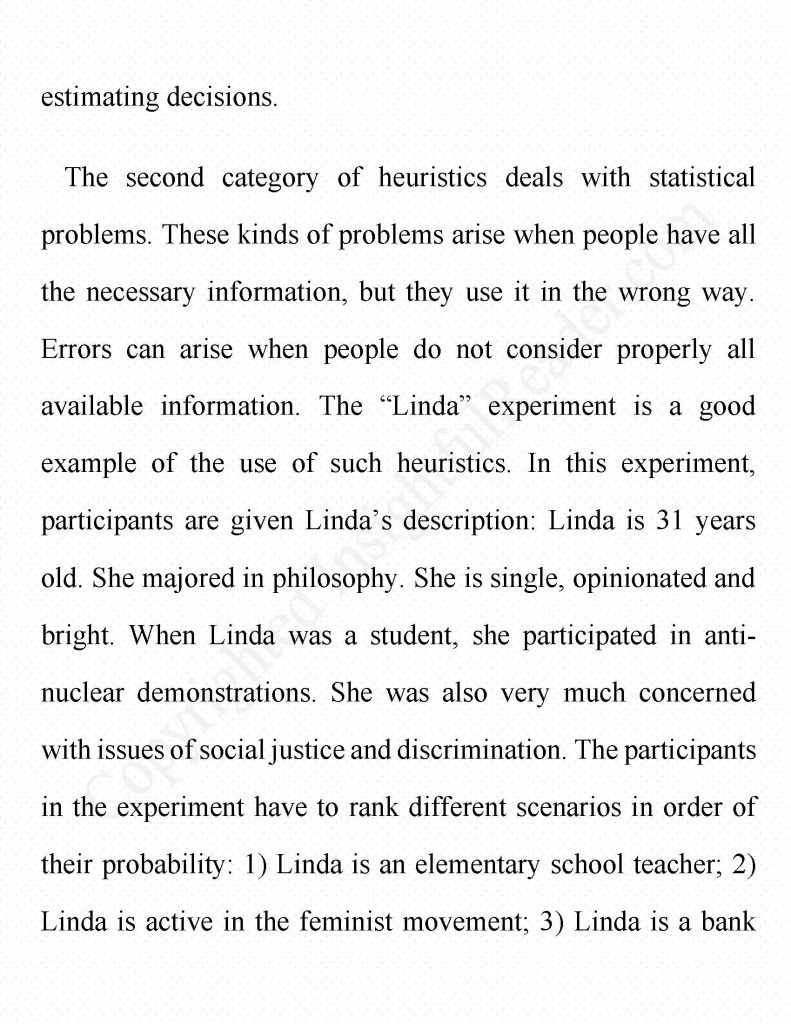 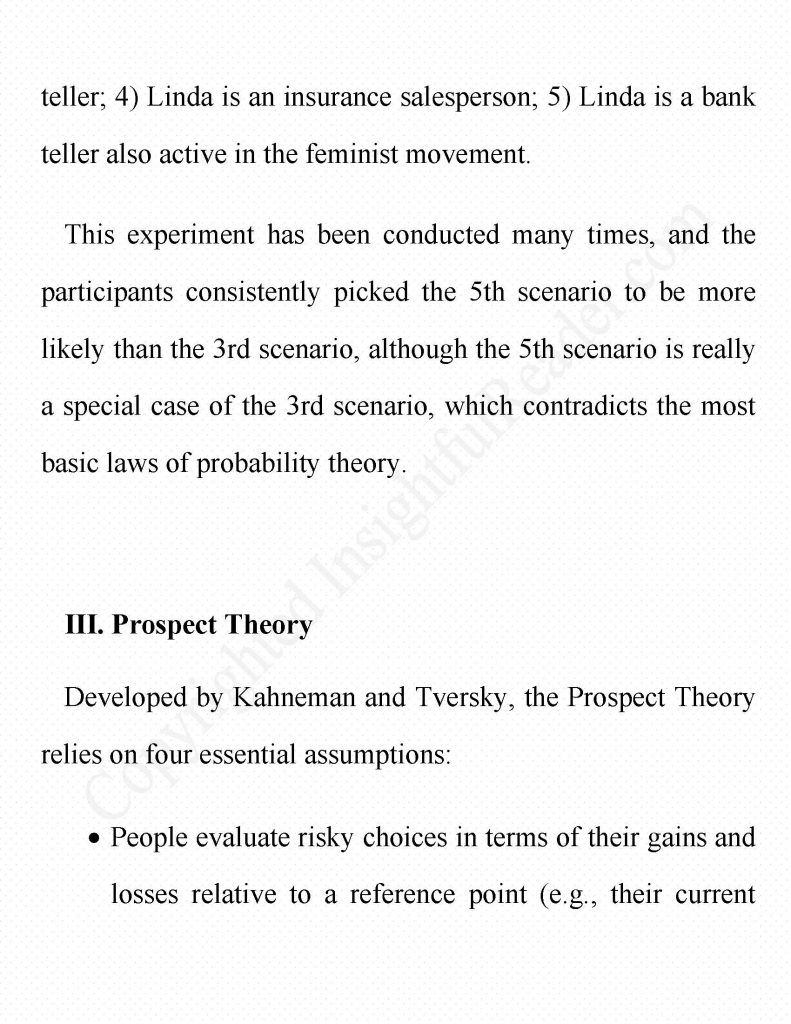 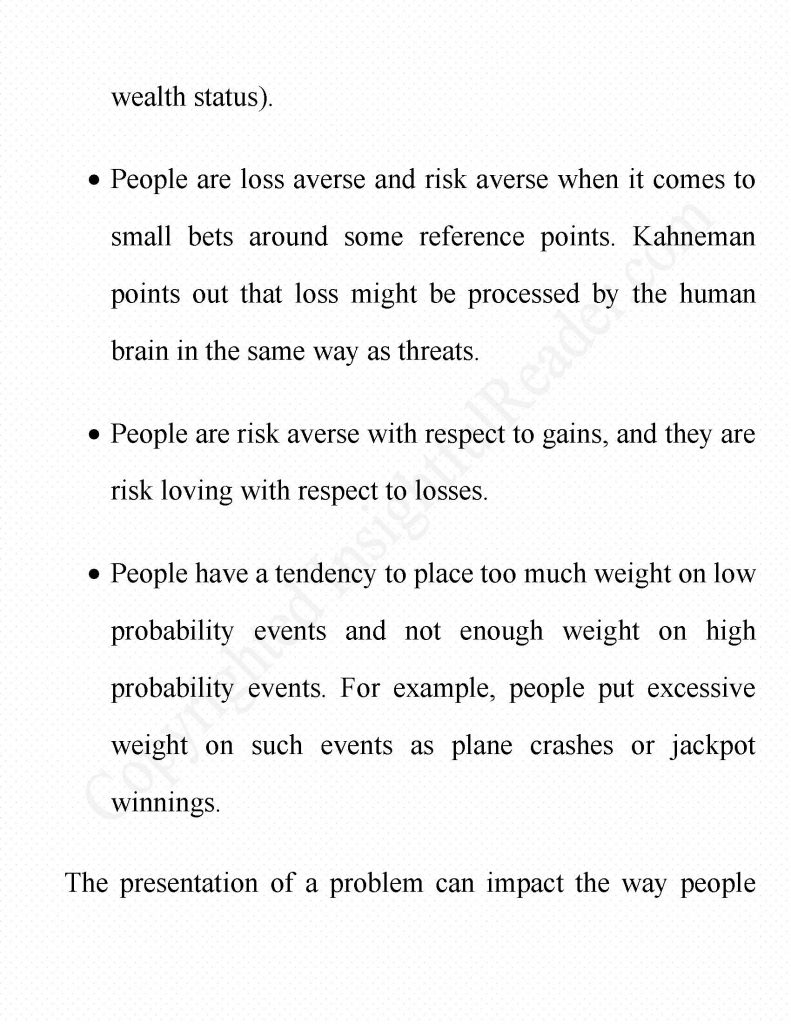 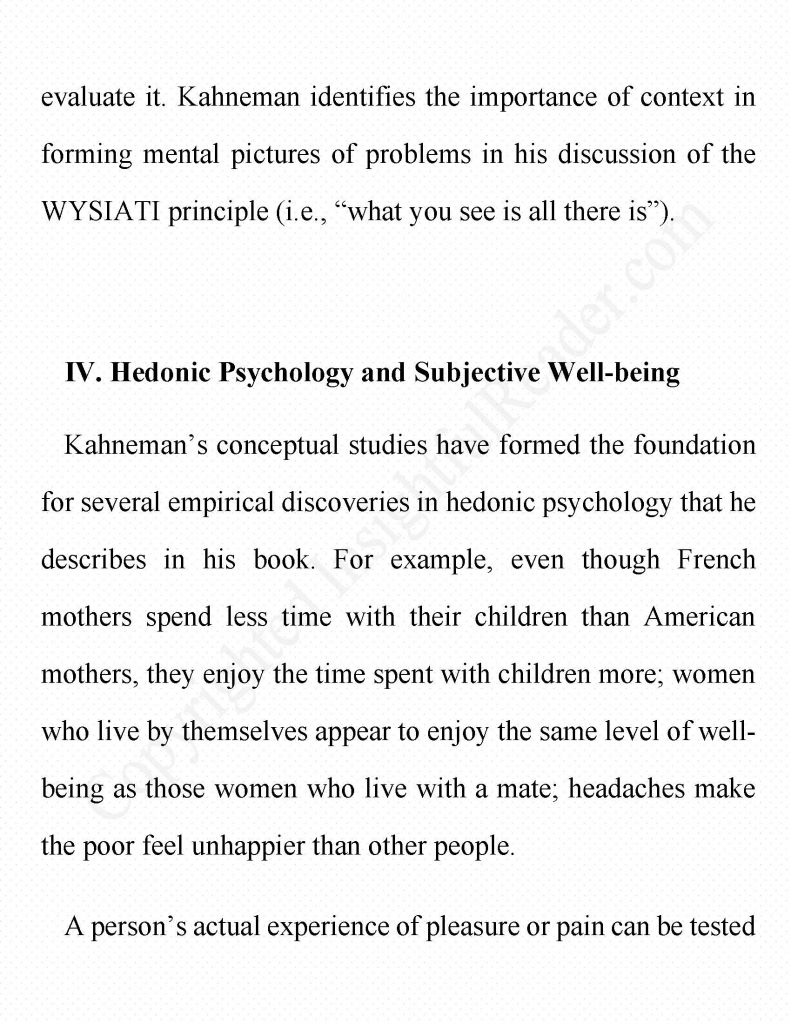 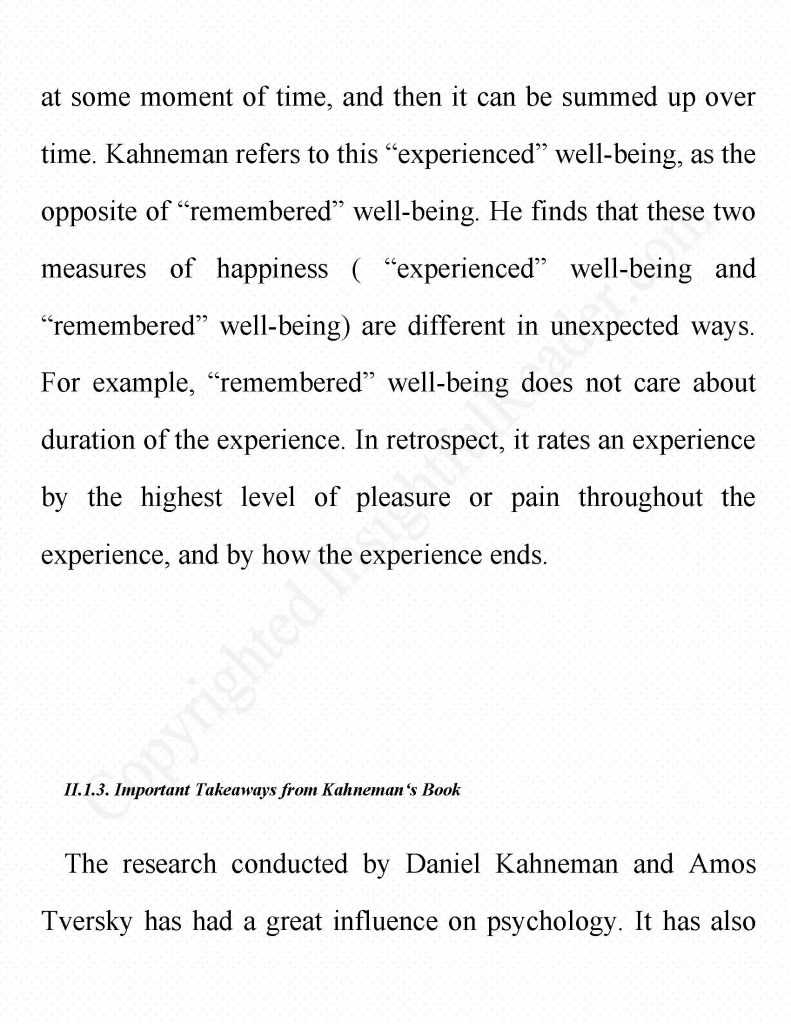 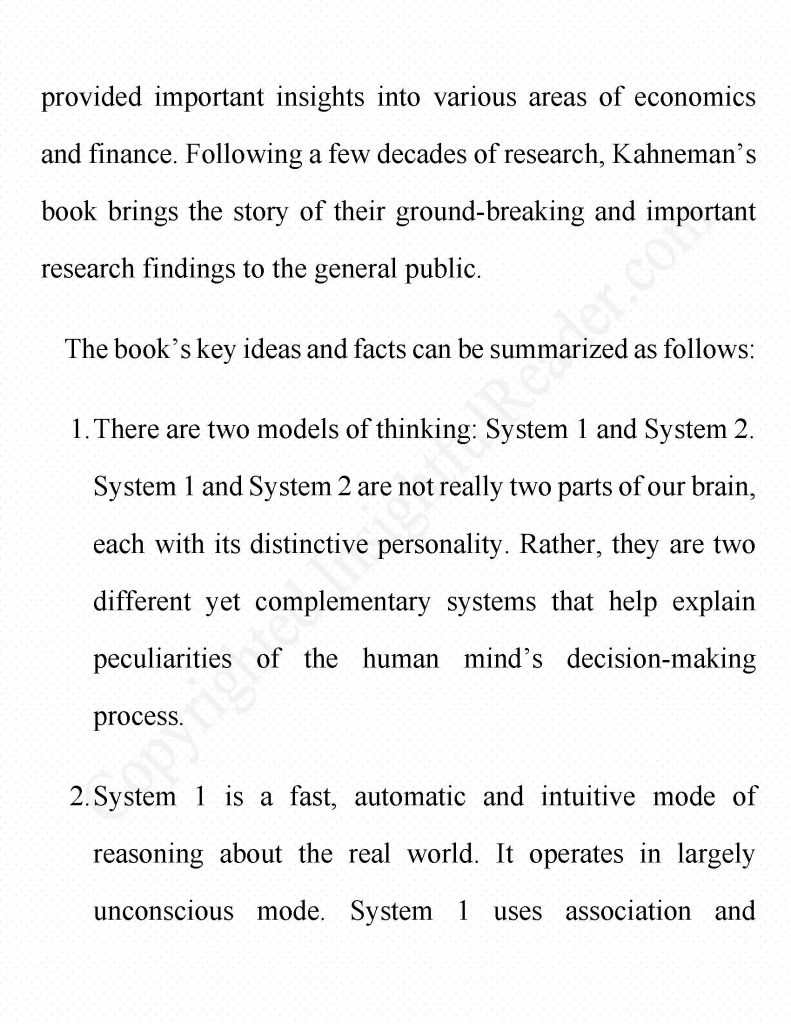 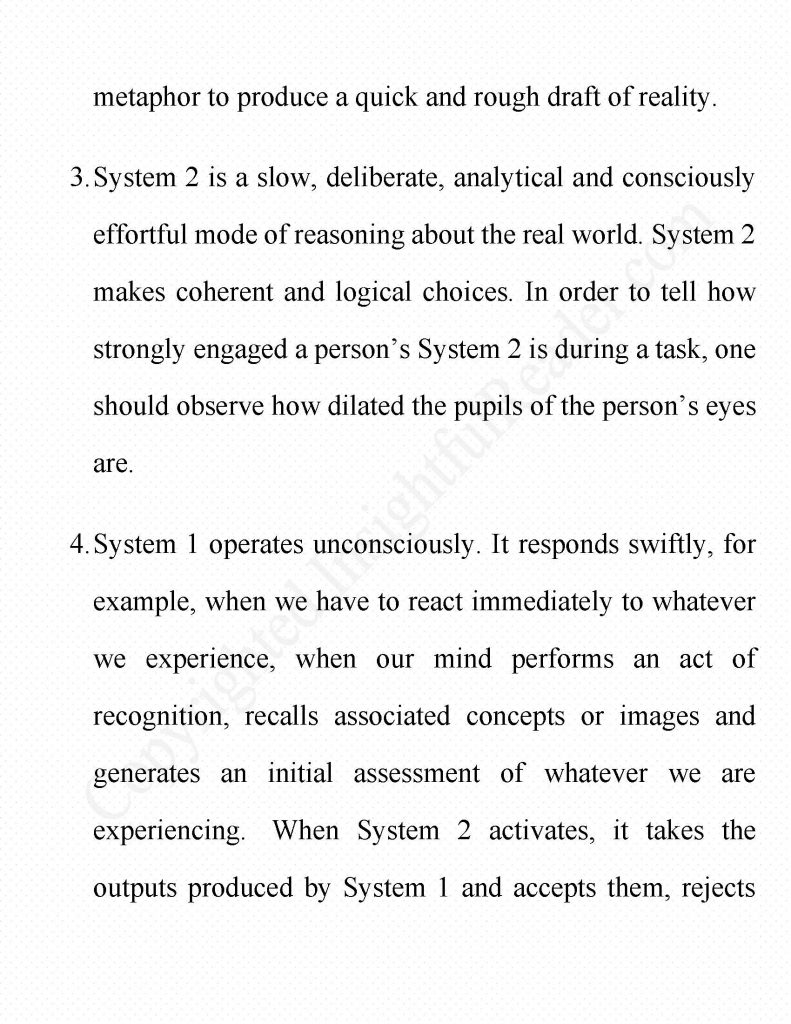 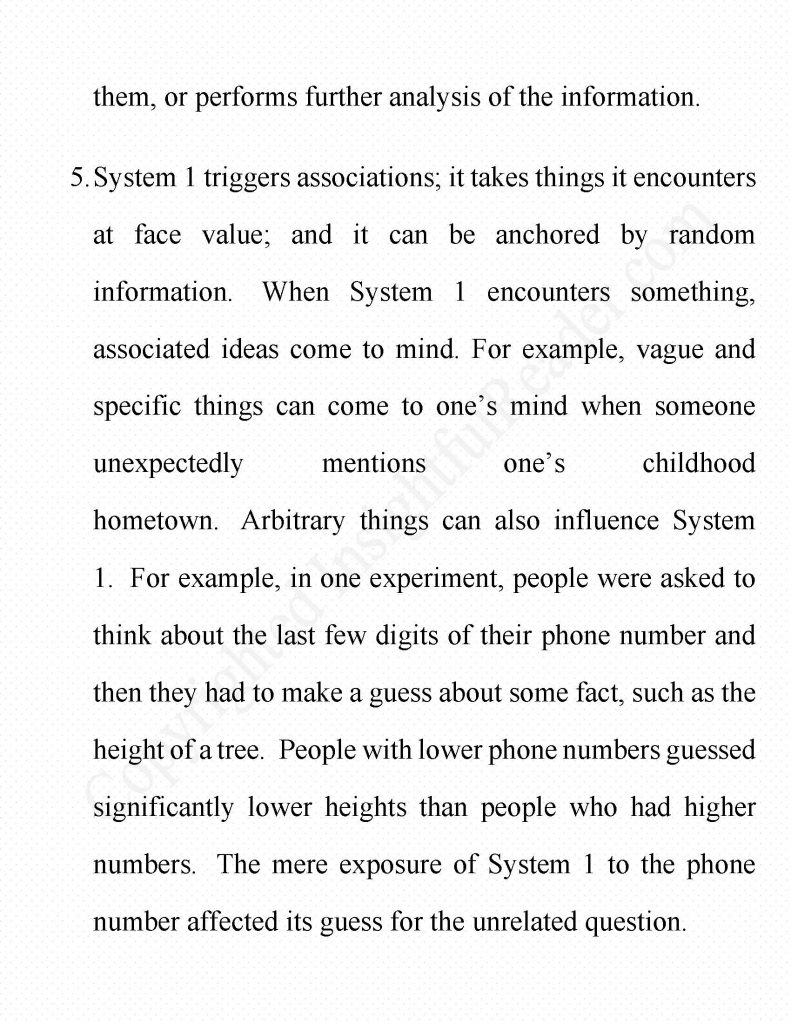 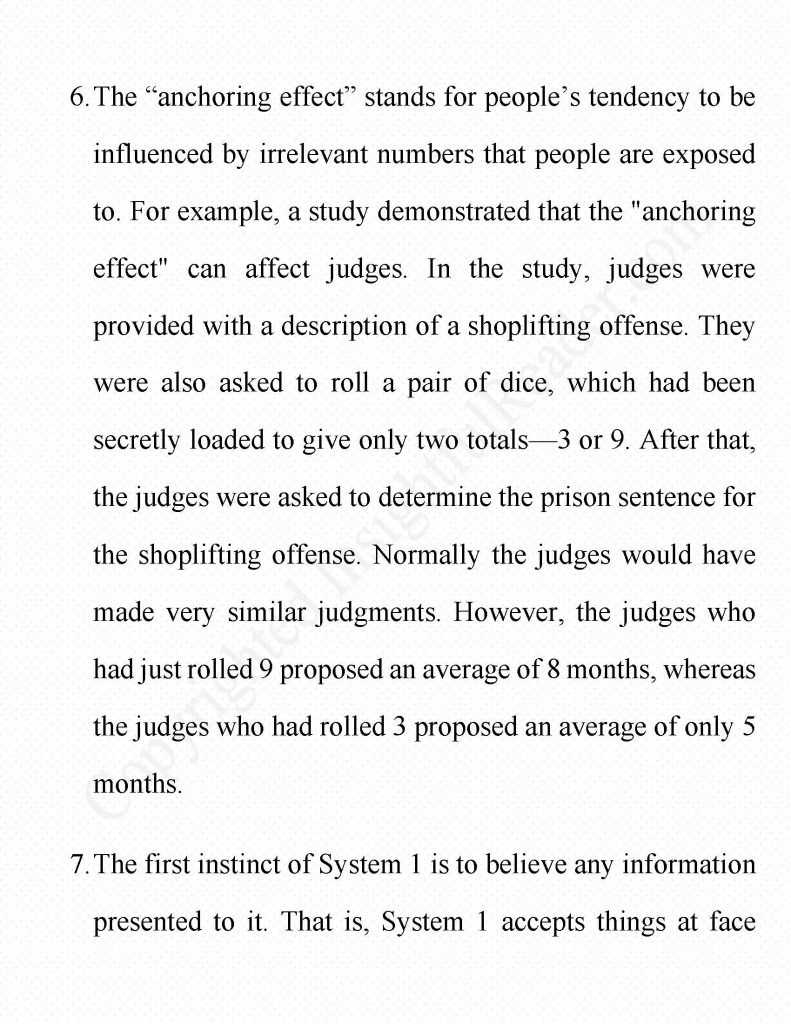 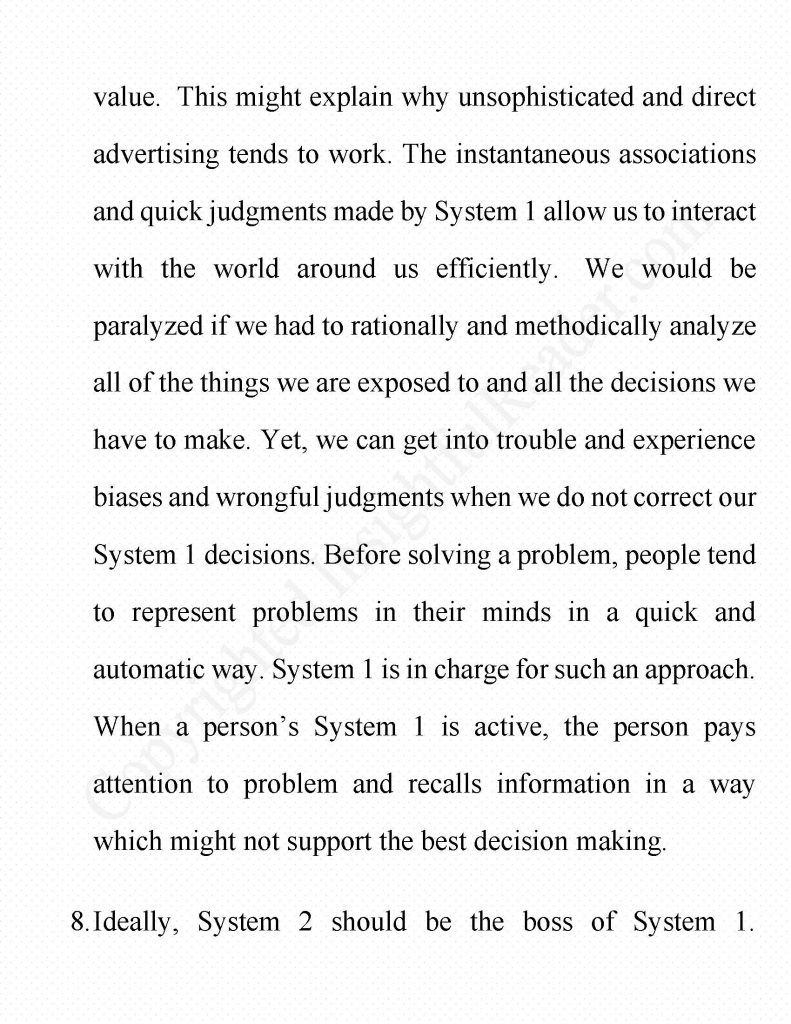 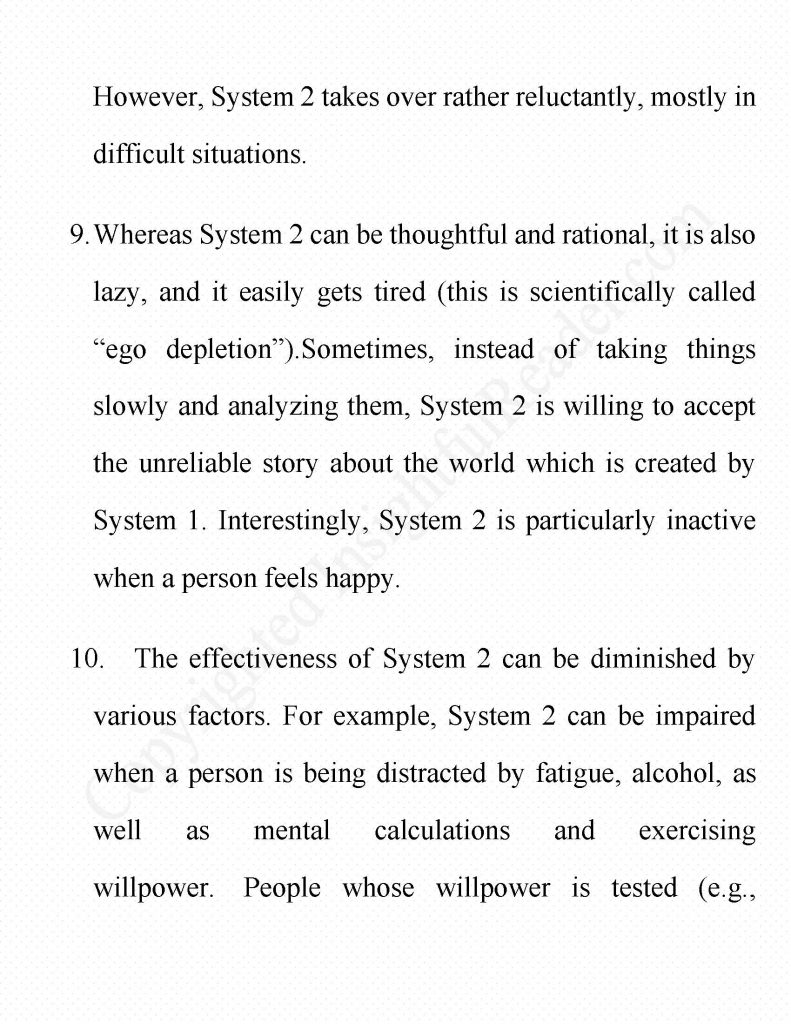 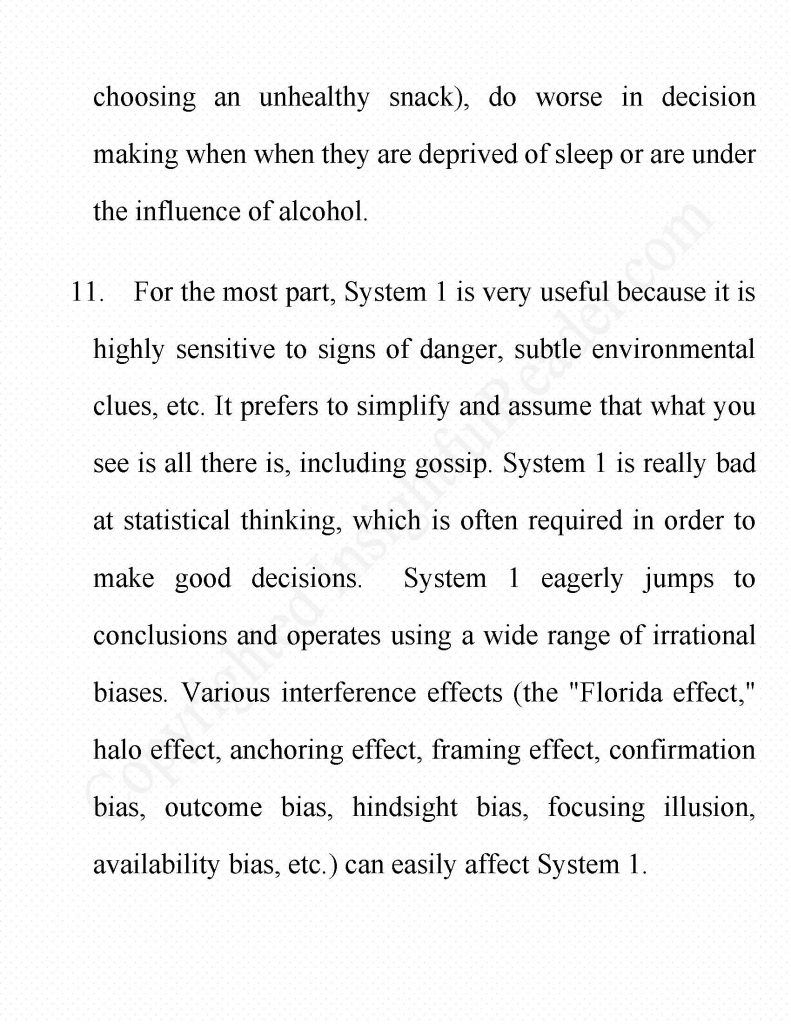 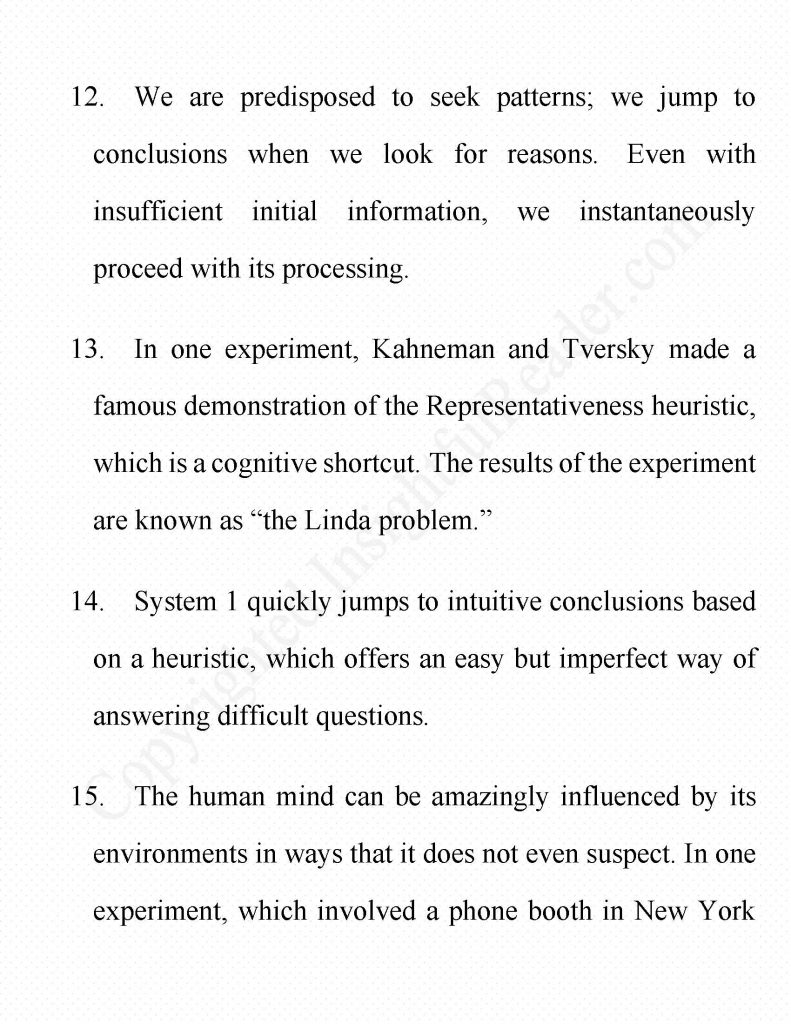 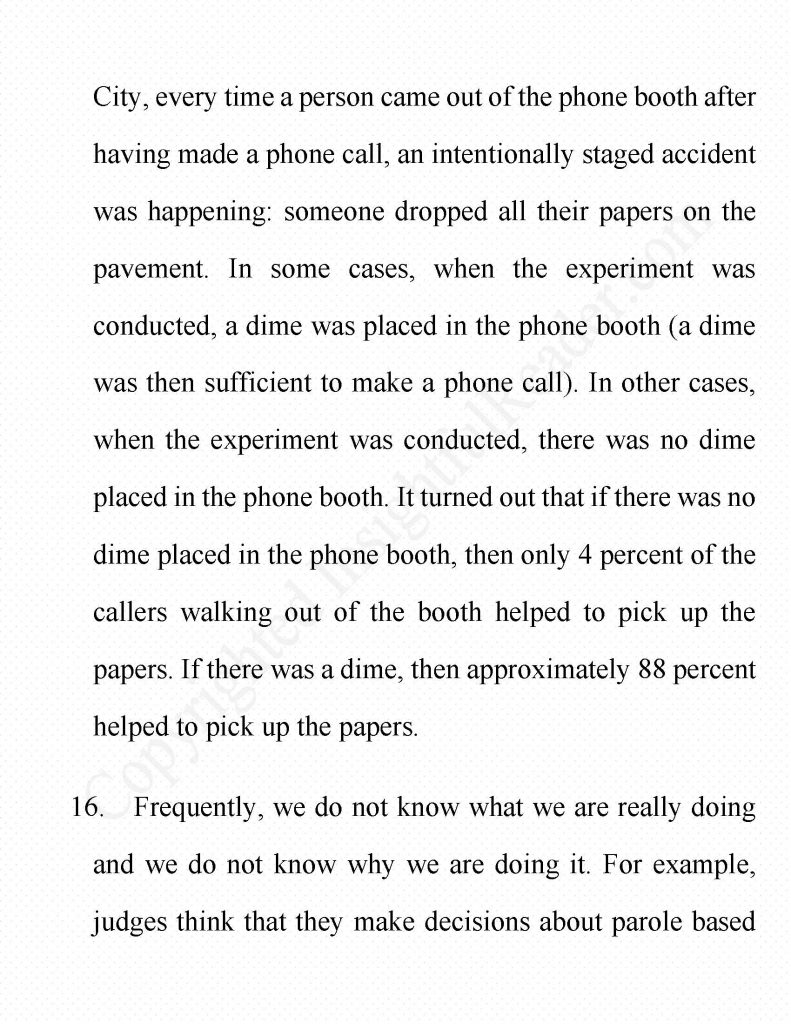 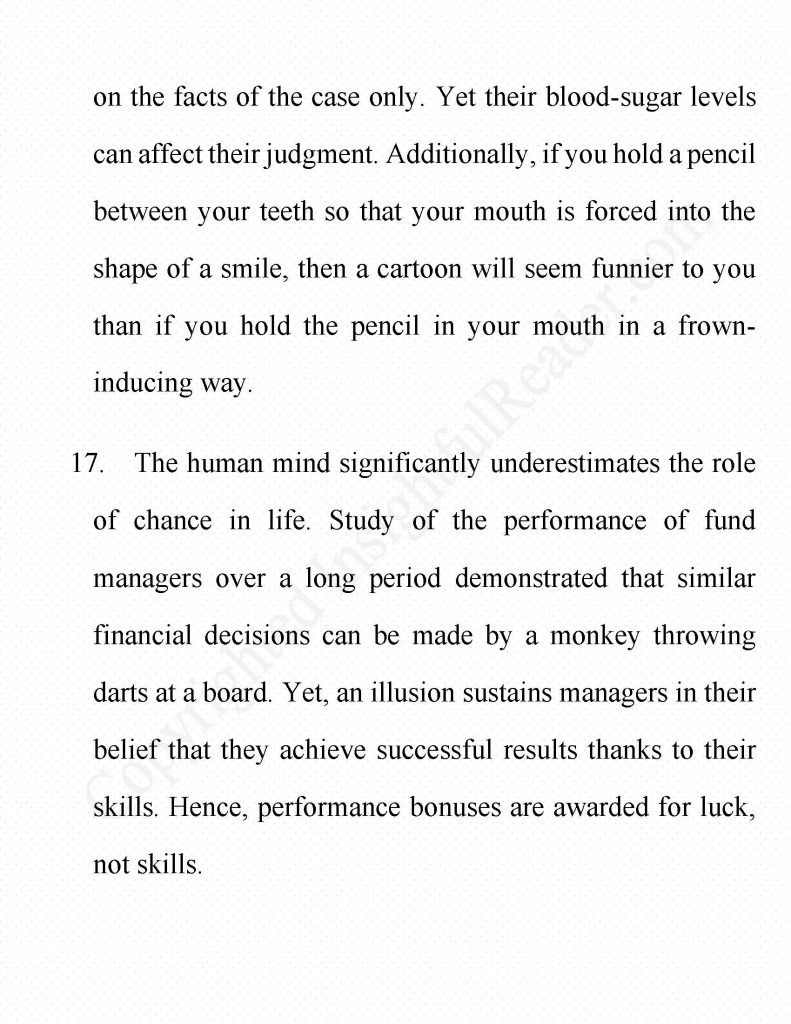 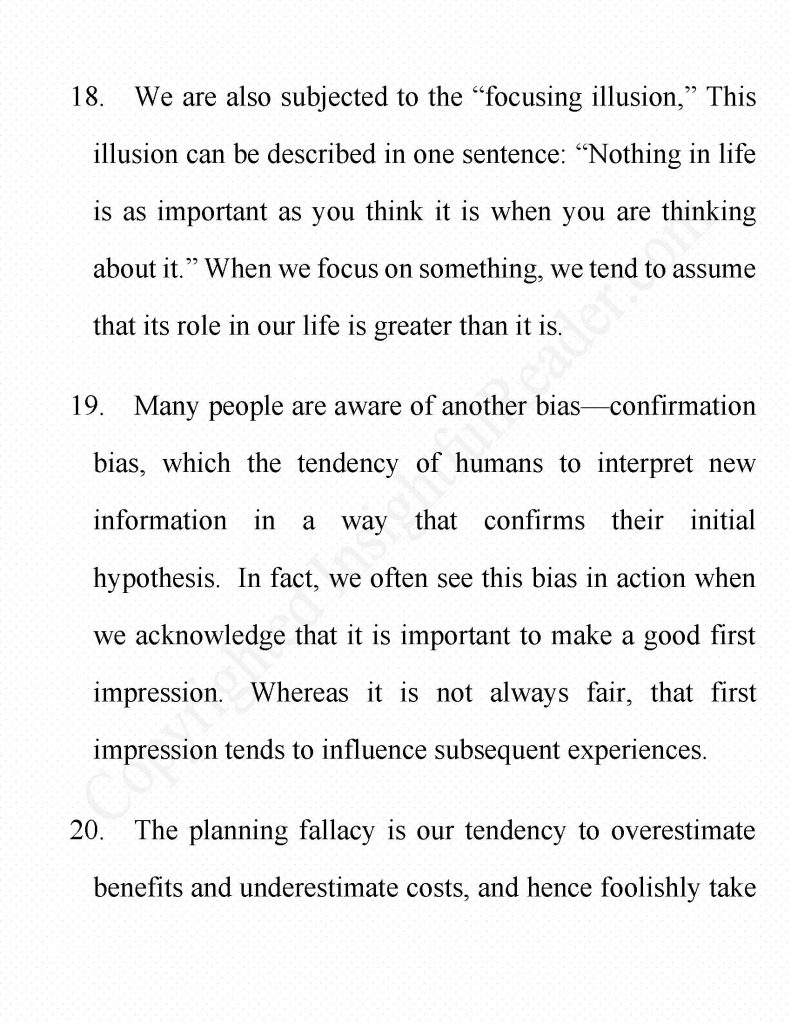 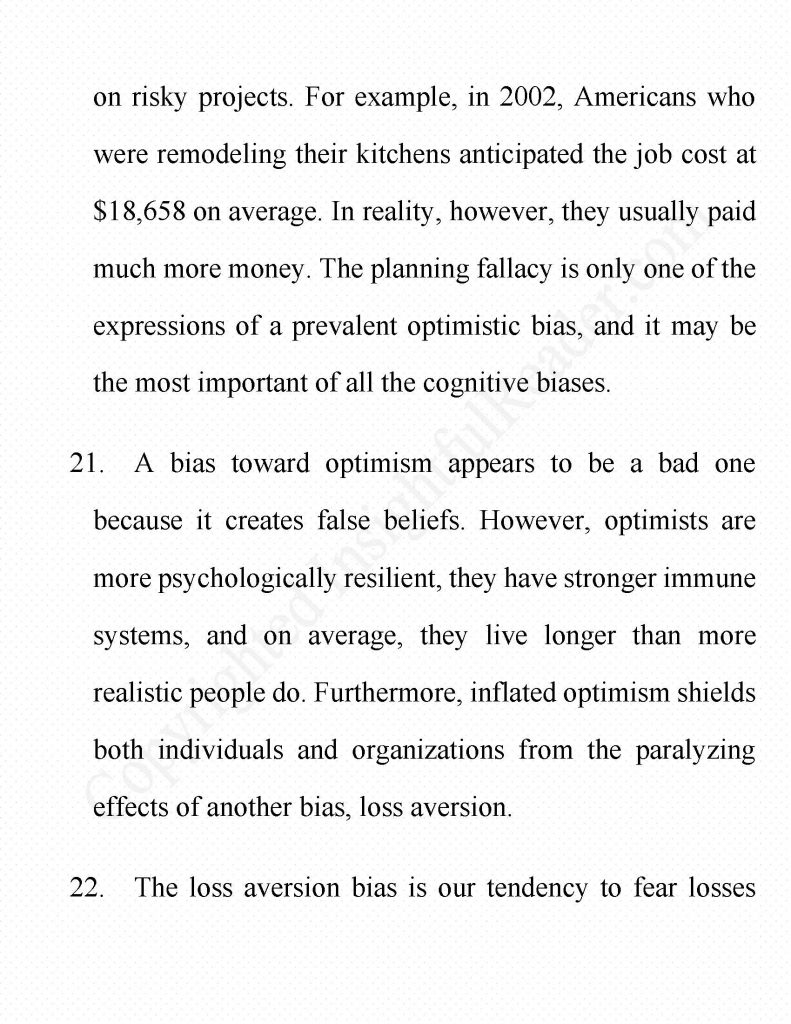 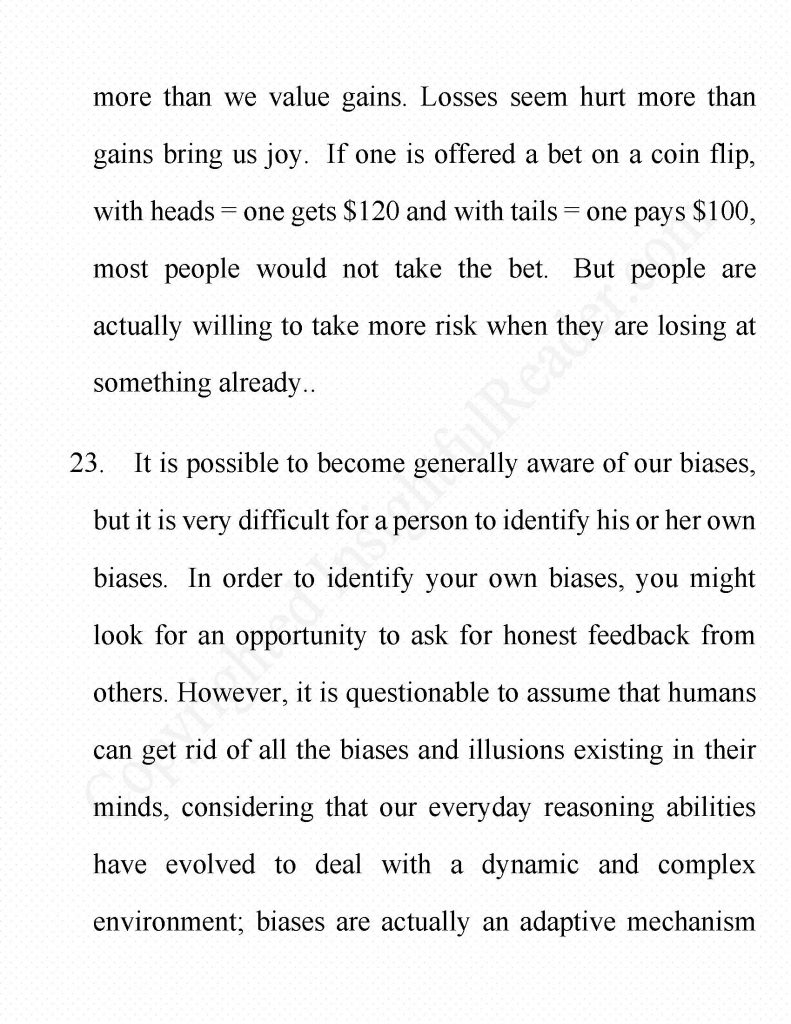 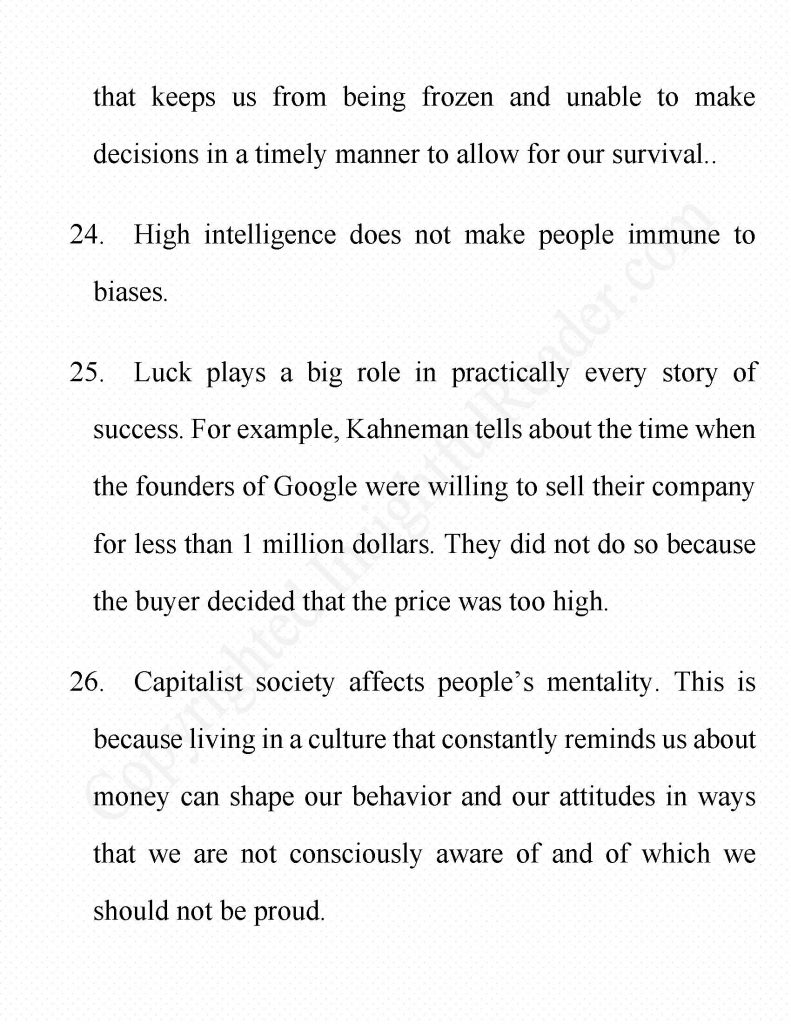 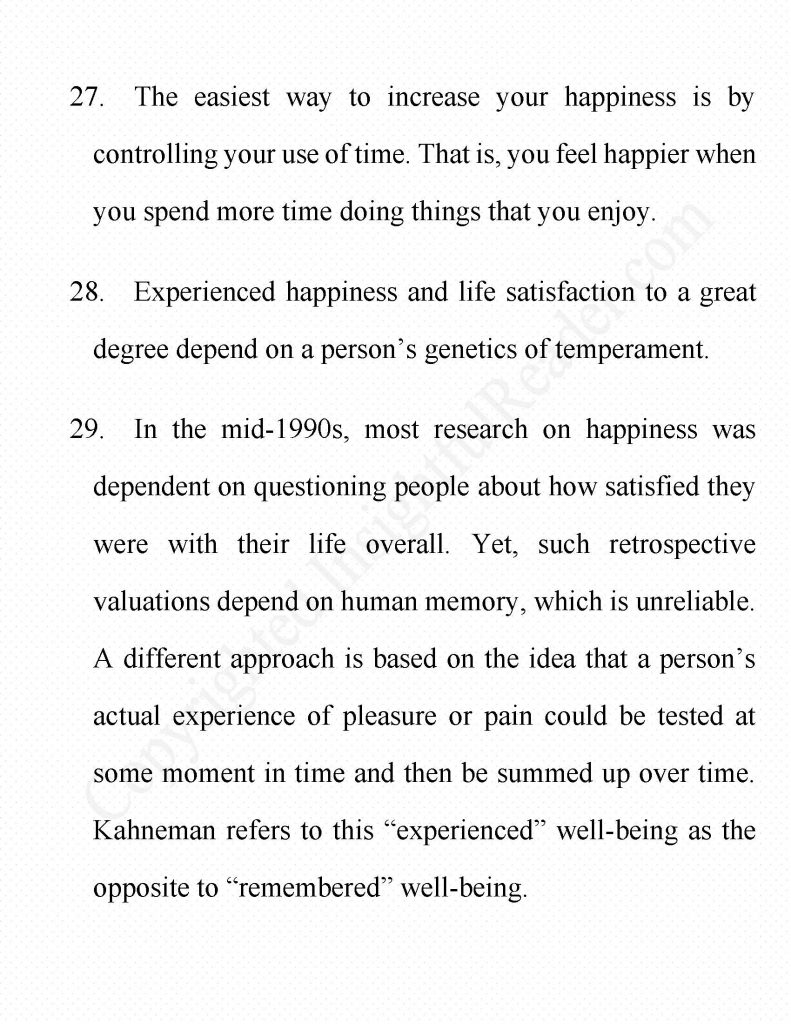 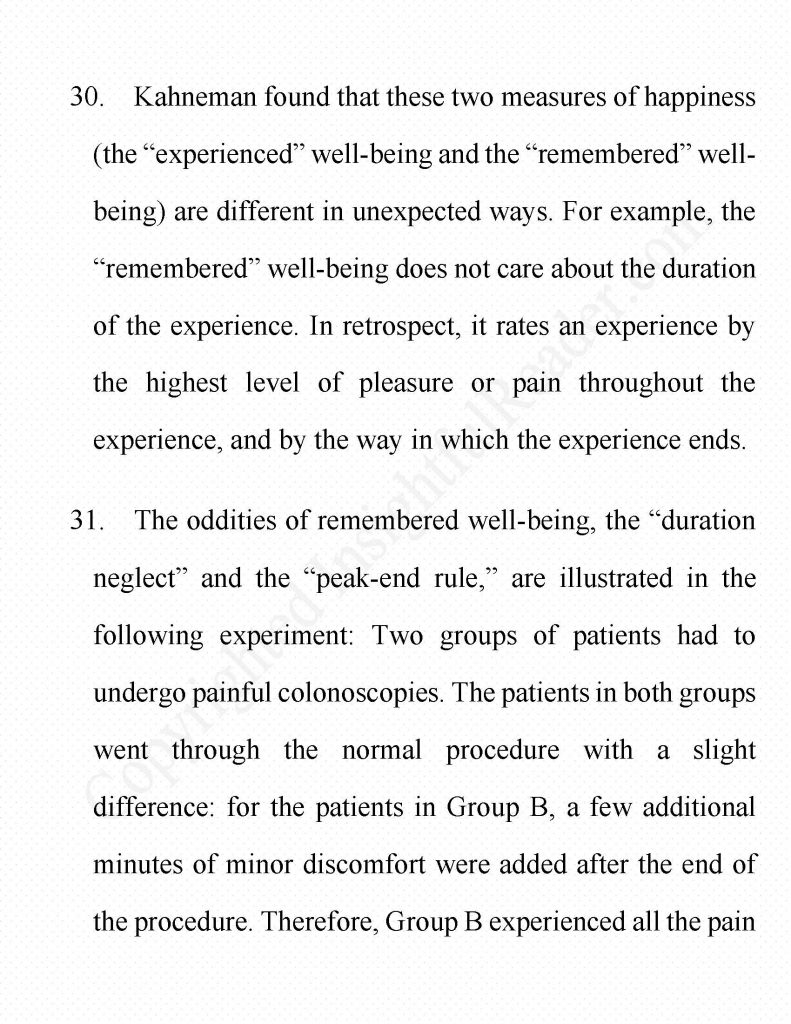 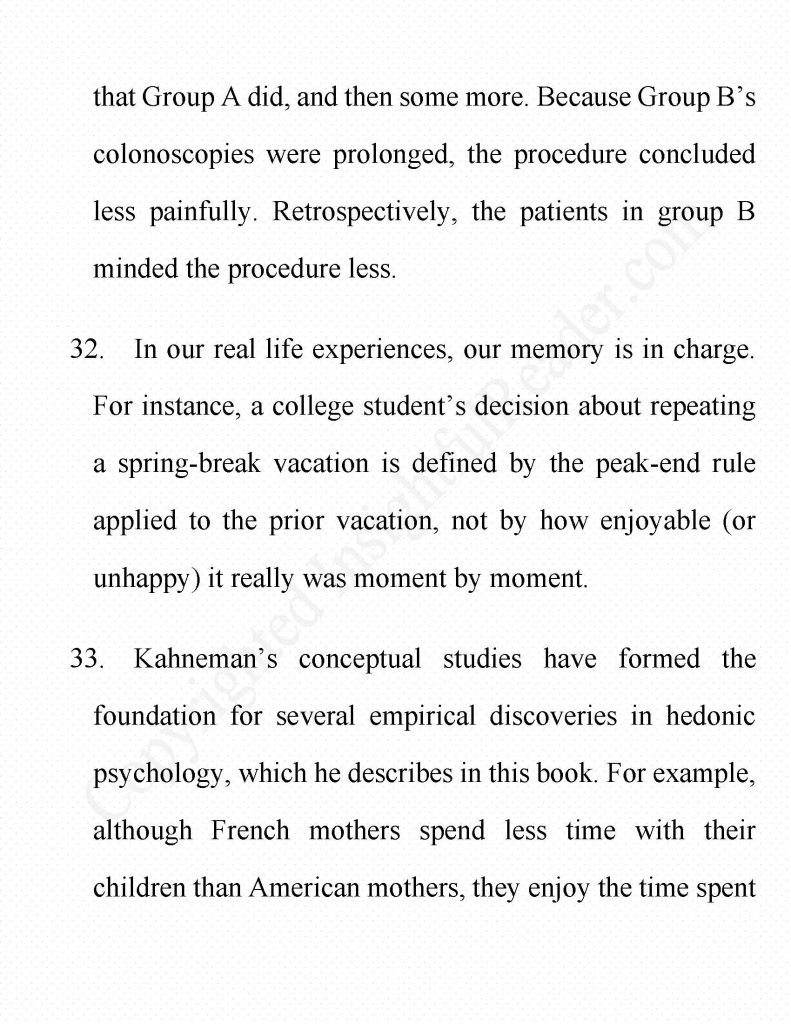 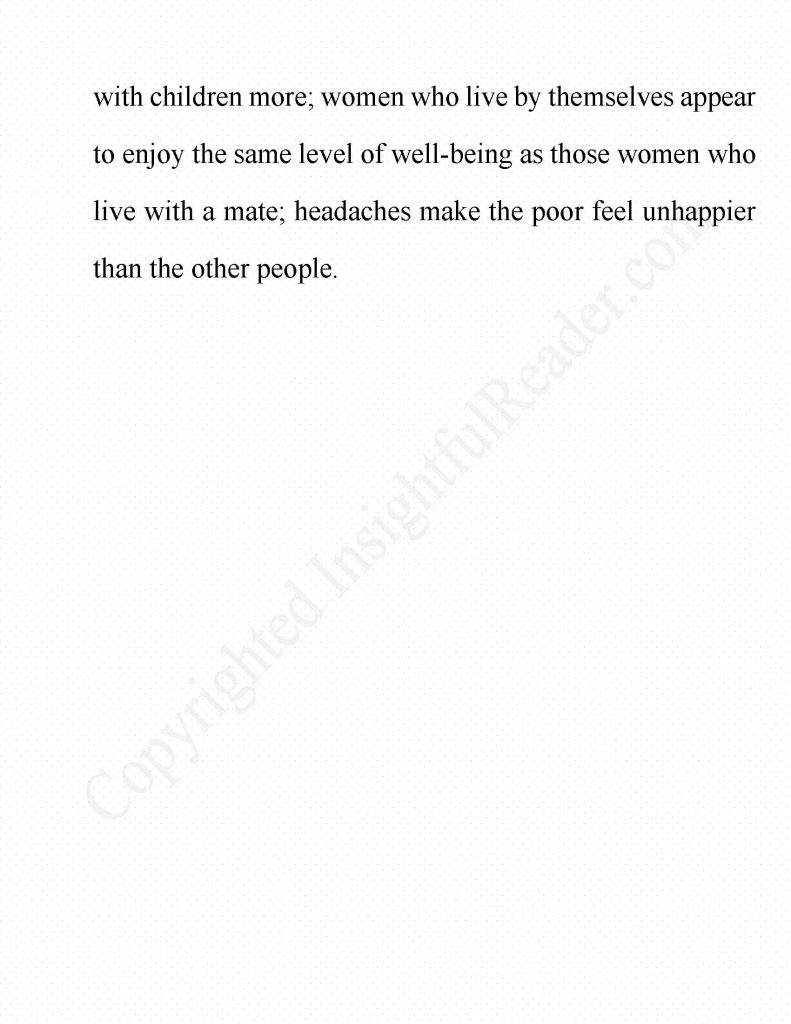 Go Back to Introduction and Overview