The Last Crossing of the Lusitania

RMS Titanic, a British passenger liner, was the largest ship of its day. It was considered to be unsinkable until it struck an iceberg and sank in the North Atlantic Ocean on April 15, 1912. Three years later, on May 1, 1915, the British ocean liner RMS Lusitania left Pier 54 on the Hudson River in Manhattan for what was to be her last voyage. Her passengers and crew could not know that they were about to repeat the fate of the Titanic. Only this time it was a man-made tragedy in which 1,198 people, including 123 Americans, lost their lives.  It was a German submarine that sank the Lusitania off the southern coast of Ireland, making an impact on the course of World War I.

Today, Pier 54 on the Hudson River in Manhattan still has the names of the shipping companies White Star and Cunard inscribed on its iron gate. Even though nothing is left there to remind us about the tragic fate of the Lusitania, Erik Larson‘s book, Dead Wake: The Last Crossing of the Lusitania, masterfully revives and brings to the reader the story of the last days of the Lusitania, her passengers and crew.

This book, A Summary and Critique of Erik Larson’s Dead Wake: The Last Crossing of the Lusitania, includes an unofficial summary and analysis of the key ideas and facts in Larson’s book, a critique of the principal messages in the book and additional information related to the Lusitania and the political events that involved her so disastrously. 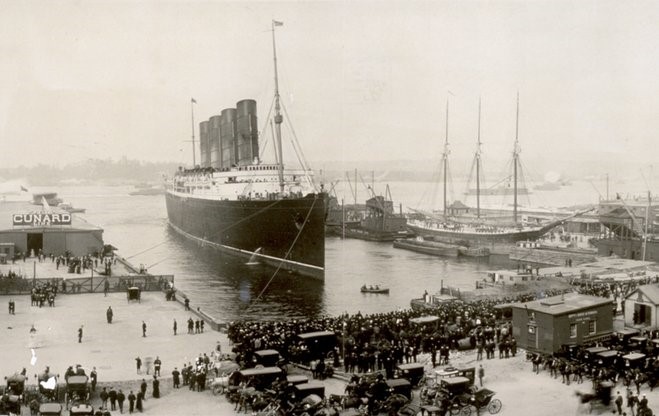 Image 1. The Lusitania, a four-funneled, 787-foot-long British ocean liner, was launched by the Cunard Line in 1906. For a short period, she was the world’s largest and fastest passenger ship. In the image, the Lusitania, with her four funnels, arrives at New York in 1907. Image Credit: N.W. Penfield / Library of Congress Prints and Photographs Division

During World War 1, when submarine warfare was escalating in the Atlantic Ocean, Germany declared the seas around the UK a war zone. The German embassy in the US placed an advertisement in the May 1, 1915, edition of The New York Times, as well as in other newspapers in the US, advising that waters adjacent to the British Islands were a war zone and cautioning travelers against sailing on British ships. Nevertheless, on May 1, 1915, the Lusitania left New York for Liverpool carrying more than 1,000 people, including children and infants.

In his book, Dead Wake: The Last Crossing of the Lusitania, Erik Larson tells the story of the last days of the ship. The book’s title comes from the maritime term that stands for the break in the water that trails behind a torpedo or ship. The story told in Larson’s book relies on various official documents and personal papers, including war logs, telegrams, survivor testimonies and even love letters. He also explains numerous technical details and terms related to the Lusitania, as well as German submarines. Larson’s book is not a novel, but a work of nonfiction based on his extensive research. However, its narrative is very engaging.

In his book, Larson refers to survivor testimonies according to which the passengers of the Lusitania felt uneasy before and during the trip because Germany had declared the waters around Britain to be a war zone.  For example, before purchasing a ticket, Charles Emelius Lauriat Jr, the owner of a chain of bookstores and one of the passengers, asked the ticket agent in Boston if the Lusitania would cross any maritime war zones. Lauriat was told that every security measure would be taken to ensure the safety of the ship.

Lauriat was not the only passenger who wondered about the safety of the trip. Many of the Lusitania’s passengers believed that the Royal Navy would convoy the ship through the war zone, and the Cunard Line that operated the Lusitania did nothing to disillusion them. When the Lusitania approached the Irish Sea, there was no naval escort waiting for her. According to Larson’s research, a secret British intelligence unit had traced a German submarine in the area. However, the Lusitania was allowed to cross a maritime war zone without naval escort even though British officials were aware of the presence of the German U-boat in the North Atlantic Ocean.

Furthermore, William Thomas Turner, the captain of the Lusitania, believed that the Germans would not attack civilian ships. He was also certain that his ship, which was the fastest liner of its time, could outrun any German submarine. With all her boilers operating, the Lusitania could move at 25 knots (almost 30 miles an hour), and cross the Atlantic Ocean in five days. But she never reached Liverpool in May 1915.

On May 7, 1915, the Lusitania came across the U-20, a German submarine, approximately 11 miles off the southern coast of Ireland. Walther Schwieger, the captain of the German U-boat, followed his government’s policy of unrestricted warfare and fired a single torpedo into the Lusitania. Approximately half a minute later, a second internal explosion shook the Lusitania, and she sank in about 18 minutes. Schwieger was surprised to see that one torpedo had sunk the Lusitania so quickly, and he did not know what could have caused the second explosion.

Of the Lusitania’s 1,959 passengers and crew, only 764 survived. Almost 1,200 passengers and crew (including 123 Americans) died in that tragic event. The British government argued that Germany breached the international laws known as the Cruiser Rules when the German submarine fired on a non-military ship without warning. The Germans insisted that the UK breached the Cruiser Rules when it used the Lusitania and other passenger liners to carry war munitions, prompting the Germans to treat the Lusitania as a naval vessel. Regardless of what the Germans were saying, the sinking of the Lusitania provided the UK with an opportunity to turn public opinion in the US against Germany, encouraging the US to declare war (the US entered the war two years later, in 1917).

The sinking of the Lusitania is often considered to be the reason President Wilson led the US into World War I. However, Larson argues in his book that the US entry into World War I was more complex. He also depicts Wilson’s emotional turmoil after the death of his first wife and his romance with another woman who would later become his second wife.

When it comes to the complexity of the international relations that brought the Lusitania to its tragic end, Larson points out at the cruel actions of the Germans and the cunning intent of the British Admiralty to disregard the information that the top-secret British intelligence unit had obtained after it cracked German codes and tracked the German U-boat. In spite of the fact that the British officials knew the whereabouts of the German submarine, they did not make any attempt to save the Lusitania. The lack of action on their part could be considered as criminal. They should have never allowed the Lusitania to sail alone after the Germans had publicly stated their intent to attack British ships.

In his book, Larson provides a broad picture of the events preceding and following the tragedy of the Lusitania. He portraits very different people, such as Captain Turner  and Captain Schwieger, female architect Theodate Pope Riddle and Boston bookseller Charles Lauriat, President Wilson and Sir Winston Churchill, then First Lord of the Admiralty. Larson skillfully conveys the drama of a disaster that helped to push America along the road toward war.

Go to Part I A Summary