What Scientists Say About The Power of Gut Microbes

to Heal and Protect Your Brain

Copyright©2015 M.B. Levenbrook. All Rights Reserved. No part of this book may be reproduced or retransmitted in any form or by any means without the written permission of the author.

PART I. A SUMMARY OF MEDICAL RESEARCH AND FINDINGS REVIEWED IN DR. PERLMUTTER’S BRAIN MAKER

The Gut as a Second Brain

The vagus nerve, which is the longest of the twelve cranial nerves, works as the main channel of information between the central nervous system and the hundreds of millions of nerve cells of the intestinal nervous system. It extends from the brain stem all the way to the abdomen and controls many bodily processes. For example, it maintains the heart rate and controls digestion.

The gut bacteria directly affect the function of the cells along the vagus nerve. Similarly to neurons, some microbes in the gut are capable of releasing chemical messengers that communicate to the brain through the vagus nerve.

The brain and spinal cord are part of the central nervous system. Another nervous system—the intestinal or enteric nervous system—is associated with the gastrointestinal tract. Both nervous systems are made of the same tissue and connected via the vagus nerve. The number of neurons found in the gut is so vast that many researchers call them “the second brain.”

It is customary to think that the central nervous system directs all the activity of the human body and controls all bodily functions. However, it turns out that the second brain—the enteric nervous system—regulates hormones, immune cells and muscles. It also produces from 80 to 90 percent of the total amount of serotonin in the human body. Some researches propose that this may be one reason why dietary changes are often more effective in treating depression than antidepressants.

The Connection Between the Gut and Mental Health

The gut affects the ability of a person to feel happy because 80 to 90 percent of serotonin in the human body is produced there. Serotonin is a neurotransmitter that psychiatrists consider to be the “happy brain chemical.”

Perlmutter discusses in his book a study according to which inflammation that begins in the gut may cause depression. (Actually, this information has been available for the last 80 years.)

Another study discussed in Dr. Perlmutter’s book proposes some alternatives to Ritalin, which is commonly prescribed to treat attention deficit disorder (ADD) and attention deficit hyperactivity disorder (ADHD). According to the study, the outcomes of the treatment of ADHD with Ritalin are the same as the results of a treatment that uses such supplements as essential fatty acids and probiotics (lactobacillus acidophilus).

The Key Mechanisms That Lead to Brain Degeneration

Modern research indicates that chronic inflammation and the action of free radicals are the two main mechanisms that lead to brain degeneration. Free radicals are byproducts of inflammation. In Brain Maker, Perlmutter discusses how these mechanisms are influenced by the gut bacteria and overall gut conditions.

The gut bacteria are involved in a wide variety of physiologic processes, including inflammation, detoxification, production of neurotransmitters and vitamins, immune system functioning, absorption of nutrients, sending of signals about being full or hungry, and consumption of fat and carbohydrates. Via these processes, the microbiome affects your metabolism, immune system, mood and libido, as well as your perception of the world, the clarity of your thoughts, and your feeling of being energetic or lethargic.

Good bacteria help regulate immune system response and keep in check adrenaline and cortisol, which are the hormones associated with stress. Each large group of bacteria can have many different strains. Each strain can have different effects.

The two most common groups of bacteria in the gut, which comprise more than 90 percent of the bacterial population in the colon, are Firmicutes and Bacteroidetes. Firmicutes are “equipped” with more enzymes to digest complex carbohydrates. Hence, they much more efficiently extract energy (usually measured in calories) from food. They also play an important role in increasing fat absorption. Recent medical research has revealed that the gut of obese people has elevated levels of Firmicutes and the gut of skinny people is dominated by Bacteroidetes. Studies have also demonstrated that higher levels of Firmicutes can turn on genes that elevate the risk for cardiovascular disease, obesity and diabetes.

The line between “good” and “bad” bacteria is very blurred. Generally, diversity of bacteria and the ratios of strains relative to one another are very important. Some ratios of certain bacterial strains can be beneficial for health and other ratios can be harmful. For example, E. coli can have a negative effect on health. However, when E. coli exists in the right number in the gut, it can produce vitamin K.

Whereas H. pylori is capable of regulating appetite, many researchers propose that H. pylori is the bacteria causing ulcers. And even though about 66 percent of people, who have detectable levels of H. pylori, never develop an ulcer, patients with ulcers are tested for H. pylori. If the test results are positive, then antibiotics are prescribed to kill H. pylori.

Another example is C. difficile. It is a potentially deadly bacterium. Yet, it resides in the intestines of 63 percent of newborns and 33 percent of toddlers. C. difficile does not cause any troubles unless antibiotics upset the gut environment. The antibiotics kill the competition of C. difficile, making C. difficile bacteria disproportionately grow in number and become pathogenic. 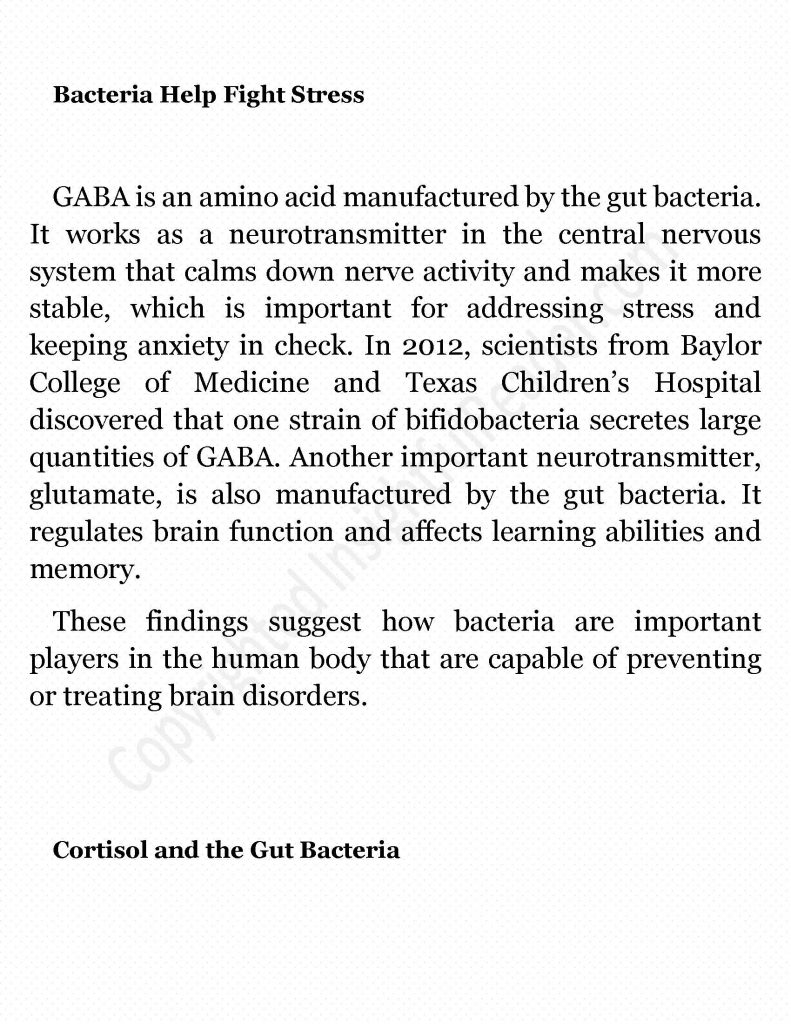 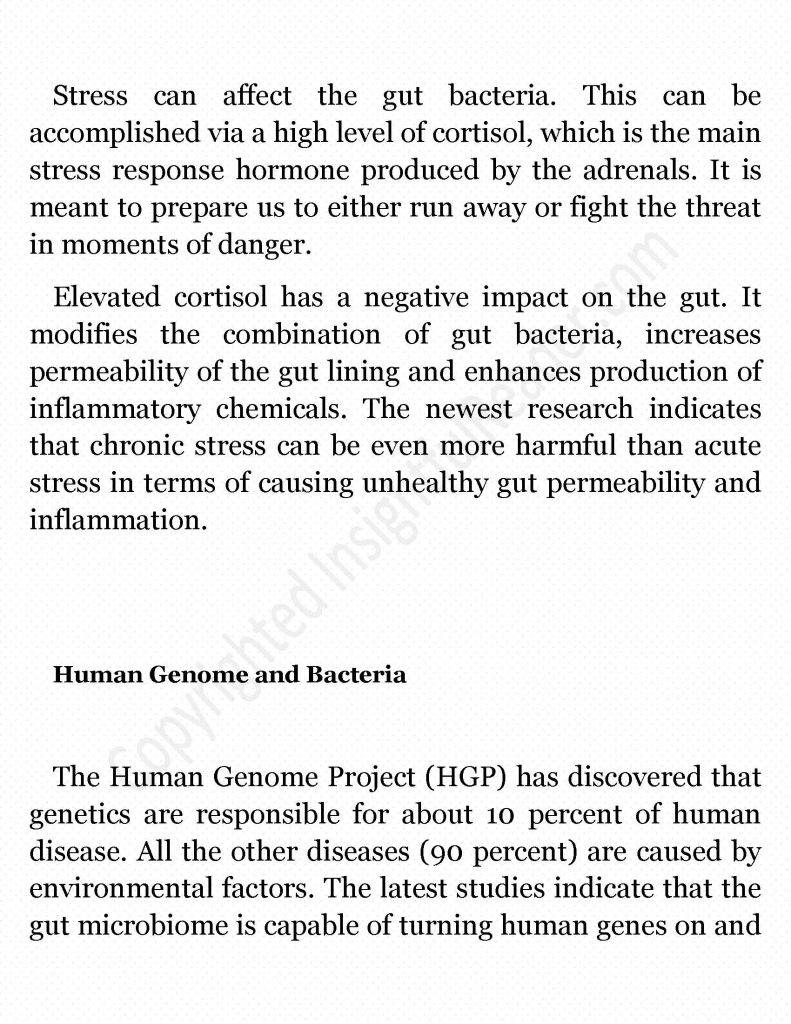 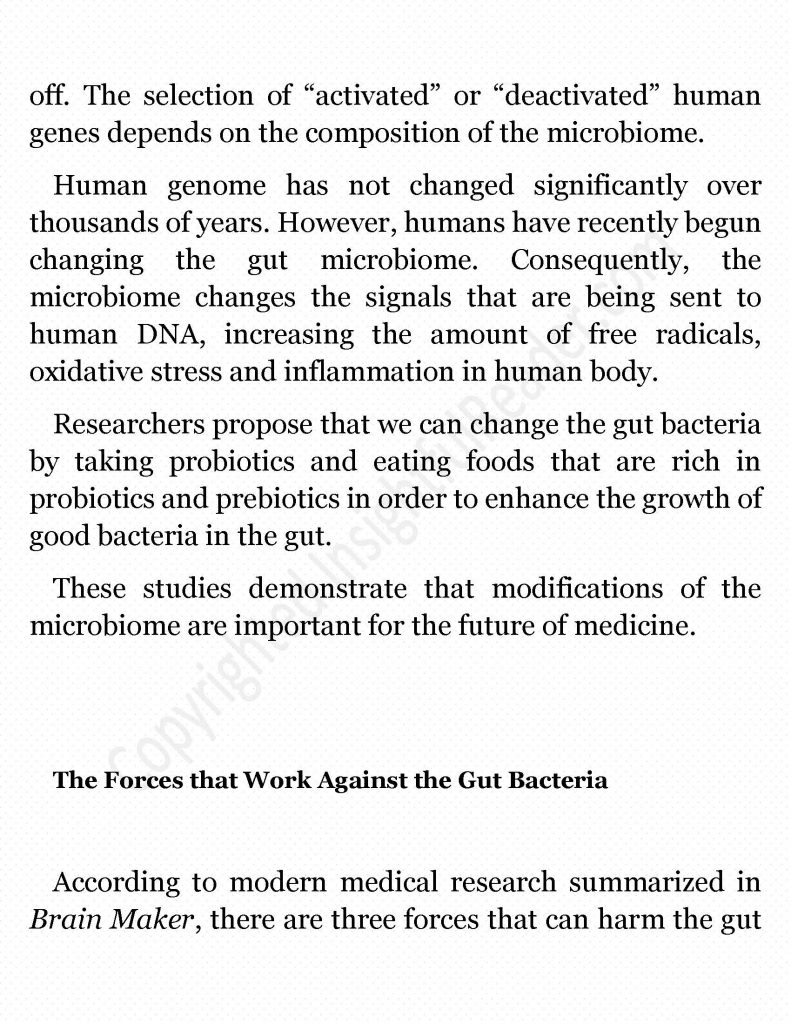 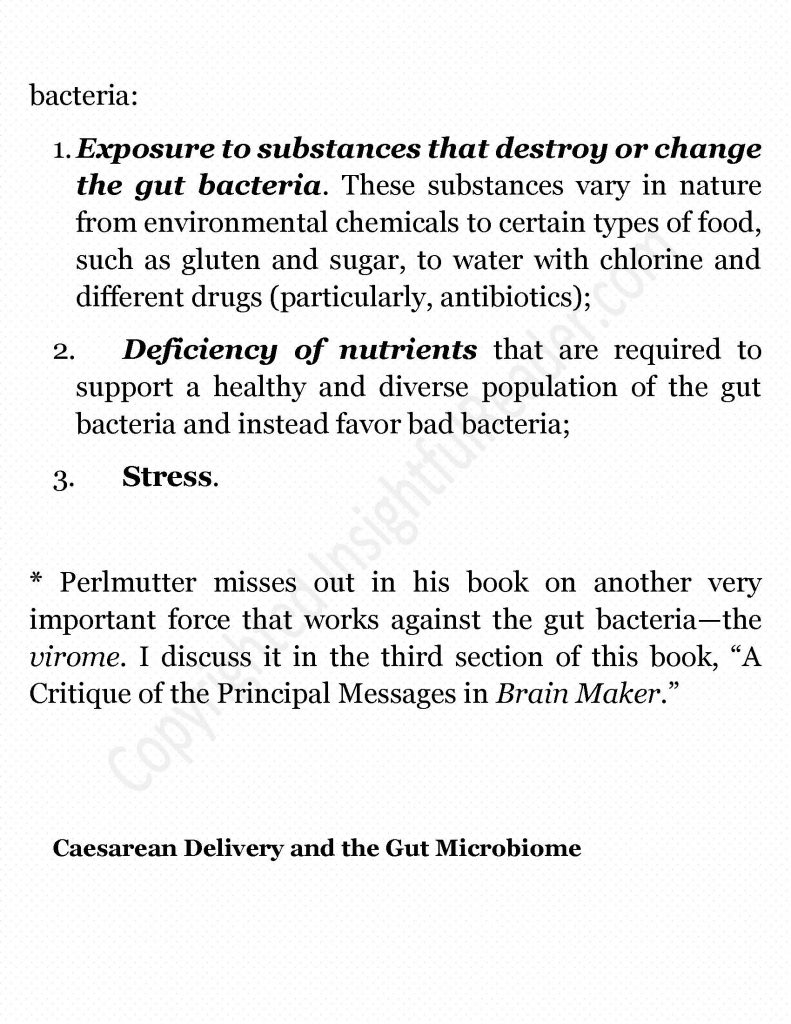 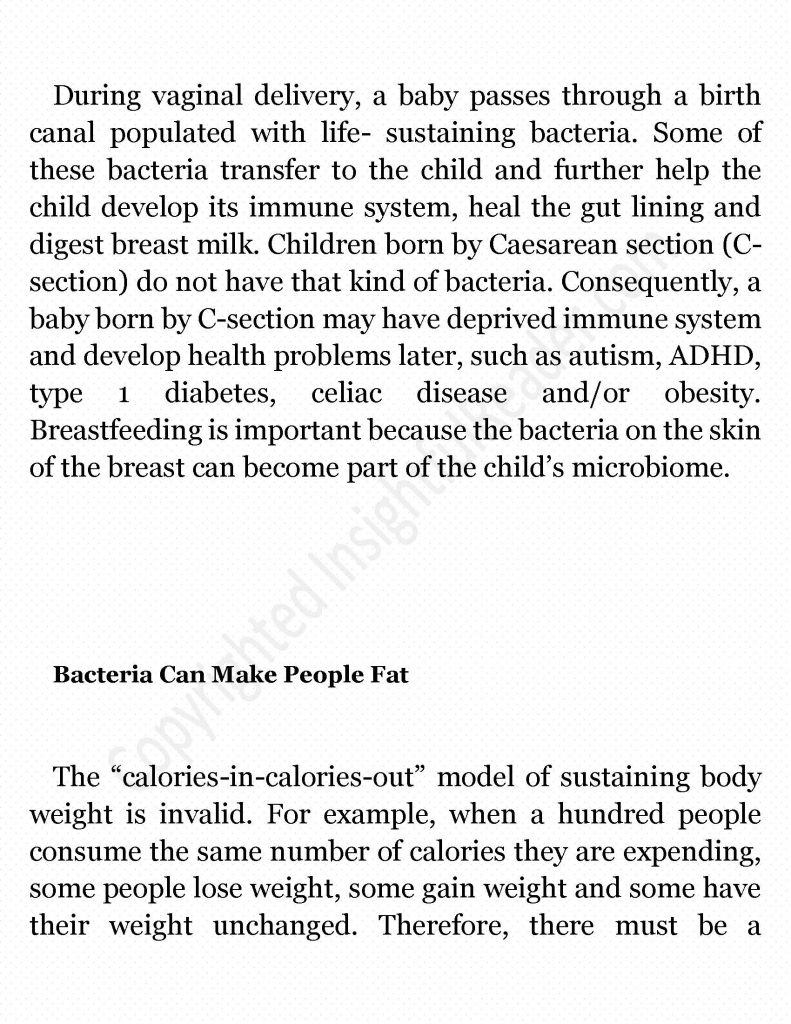 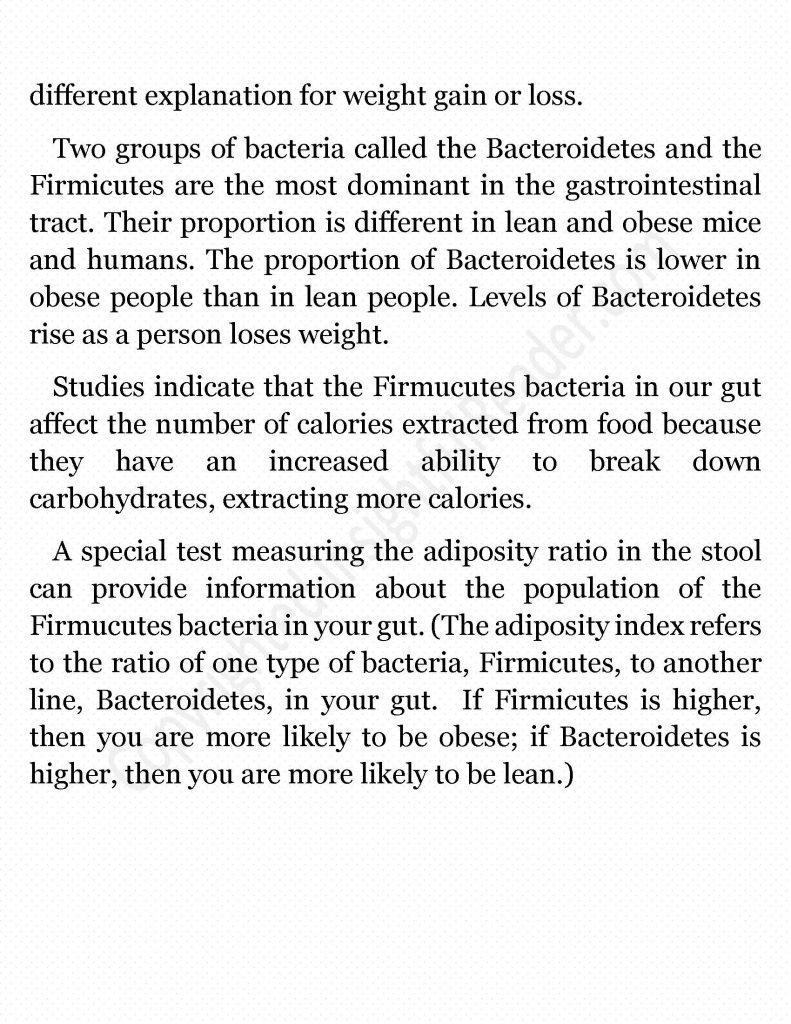 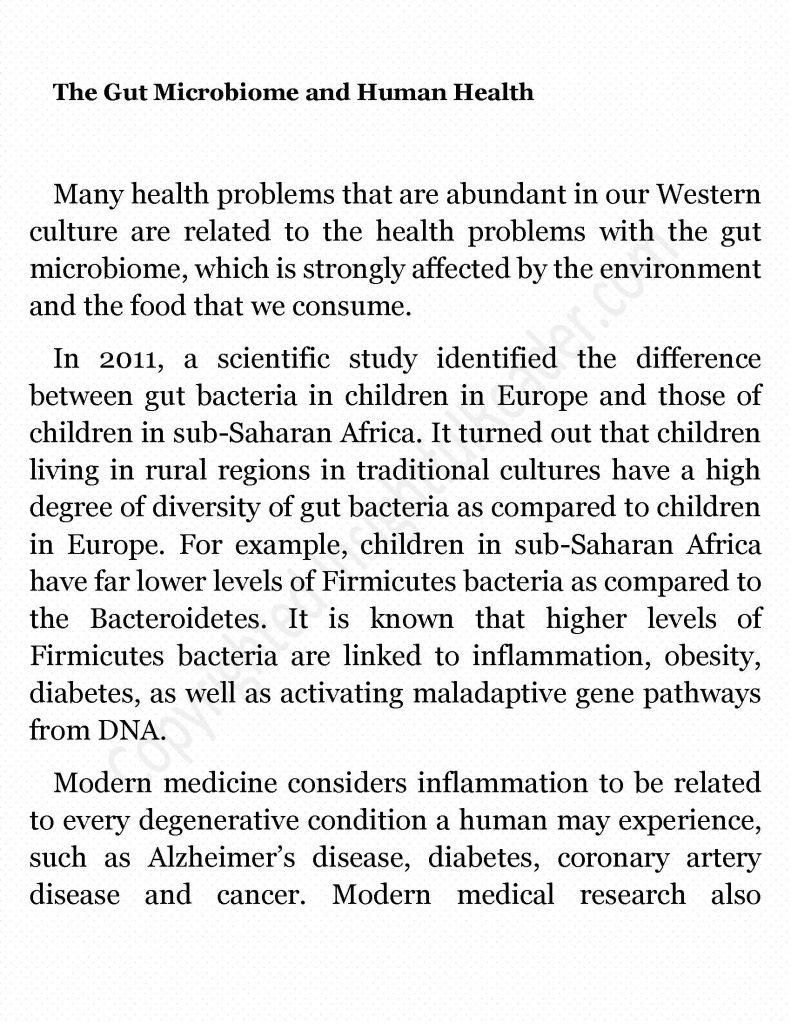 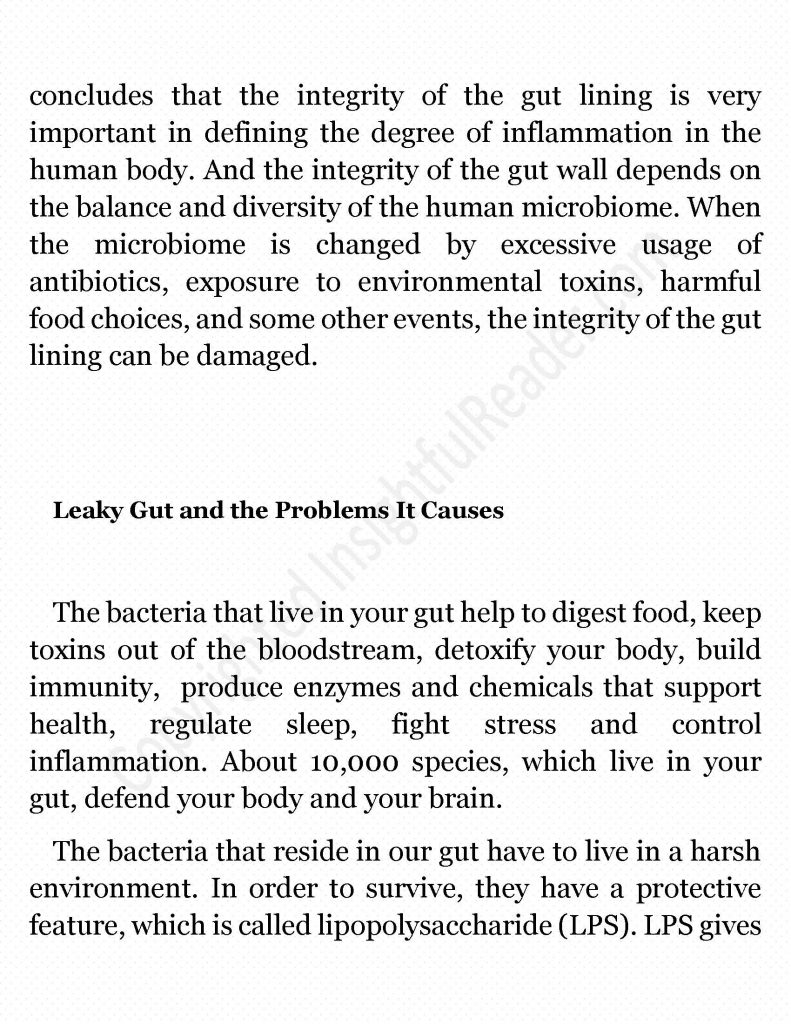 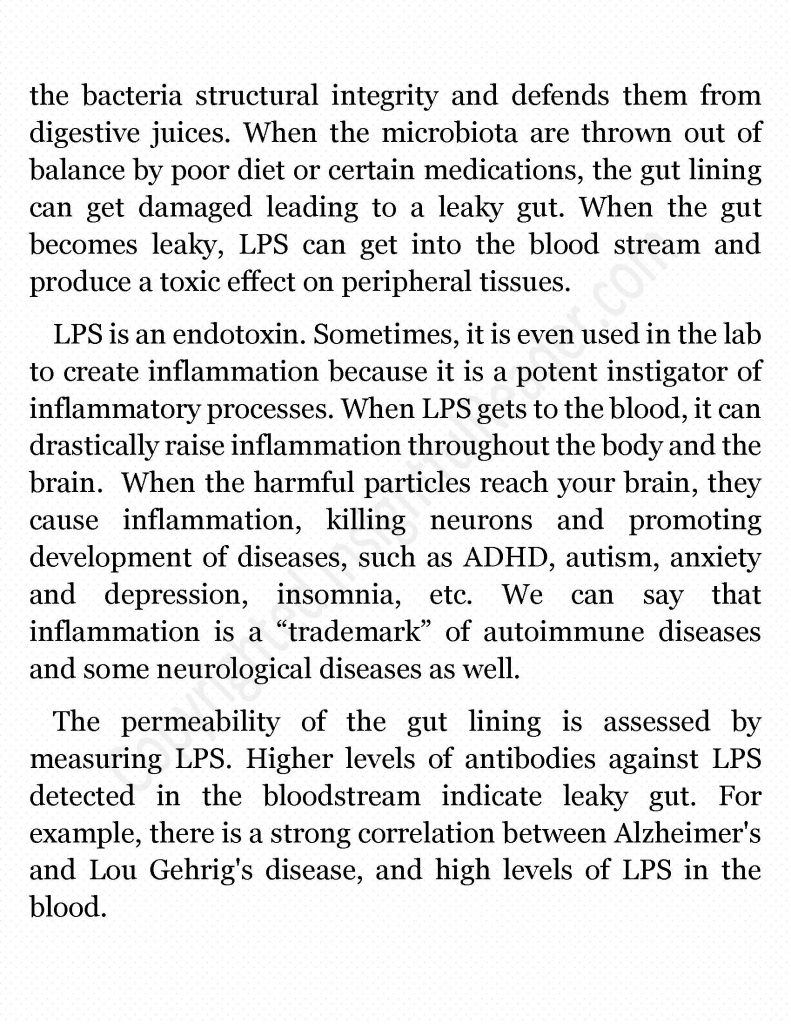 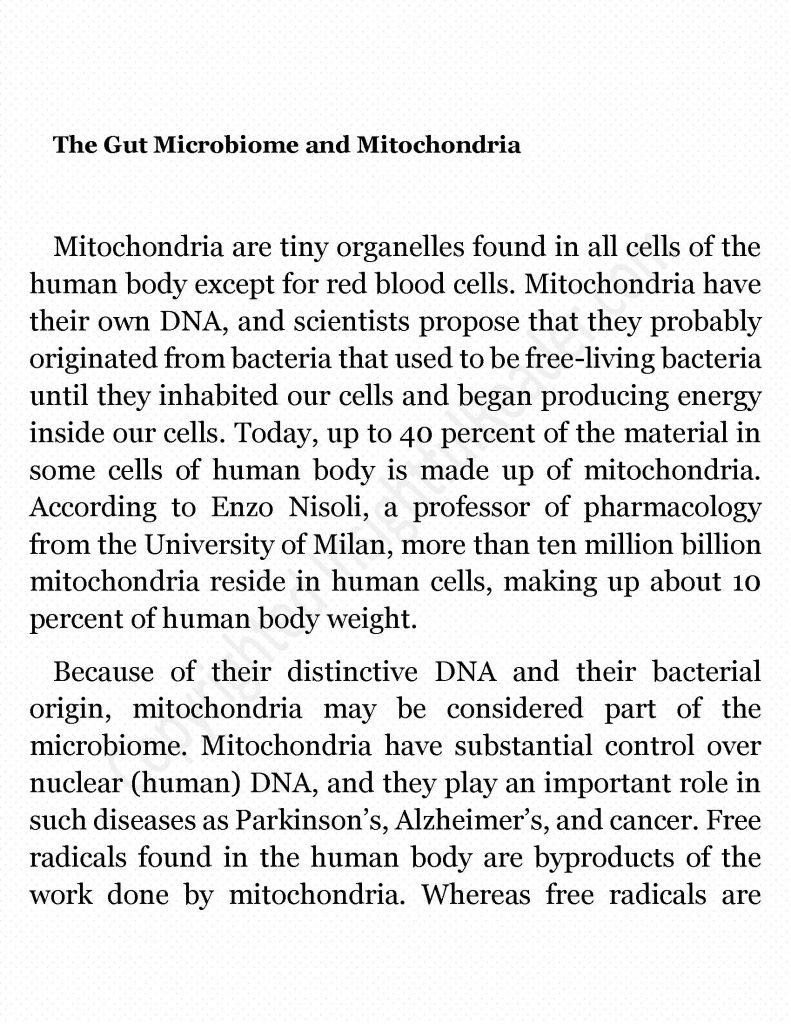 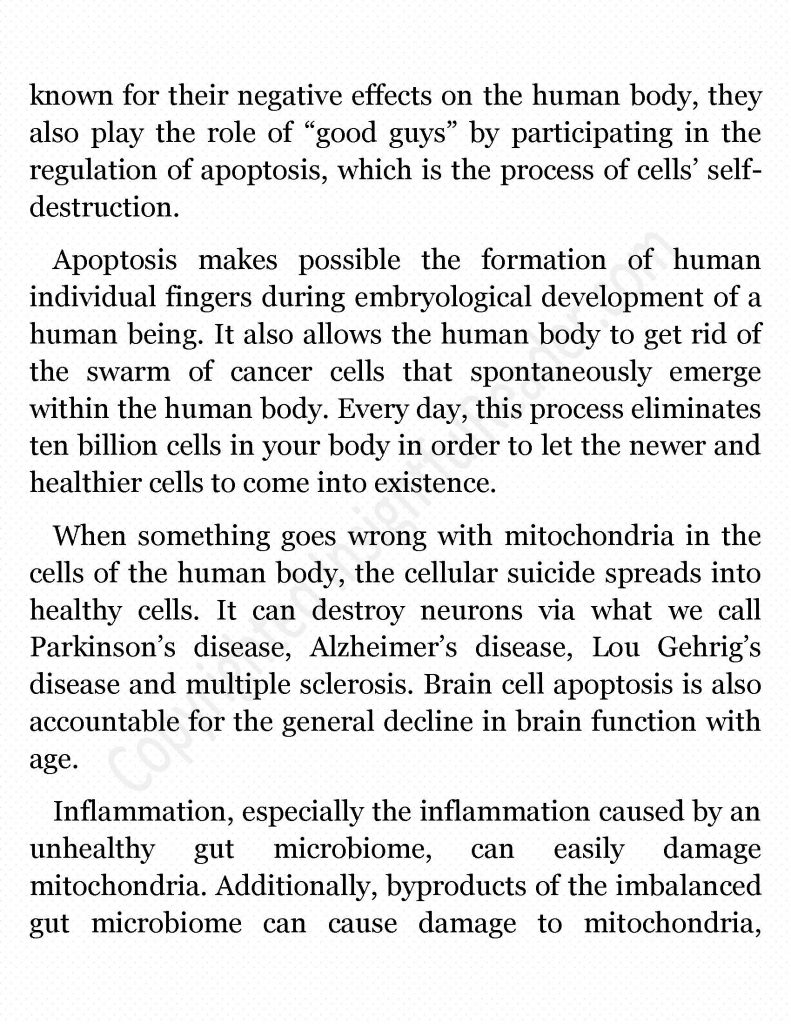 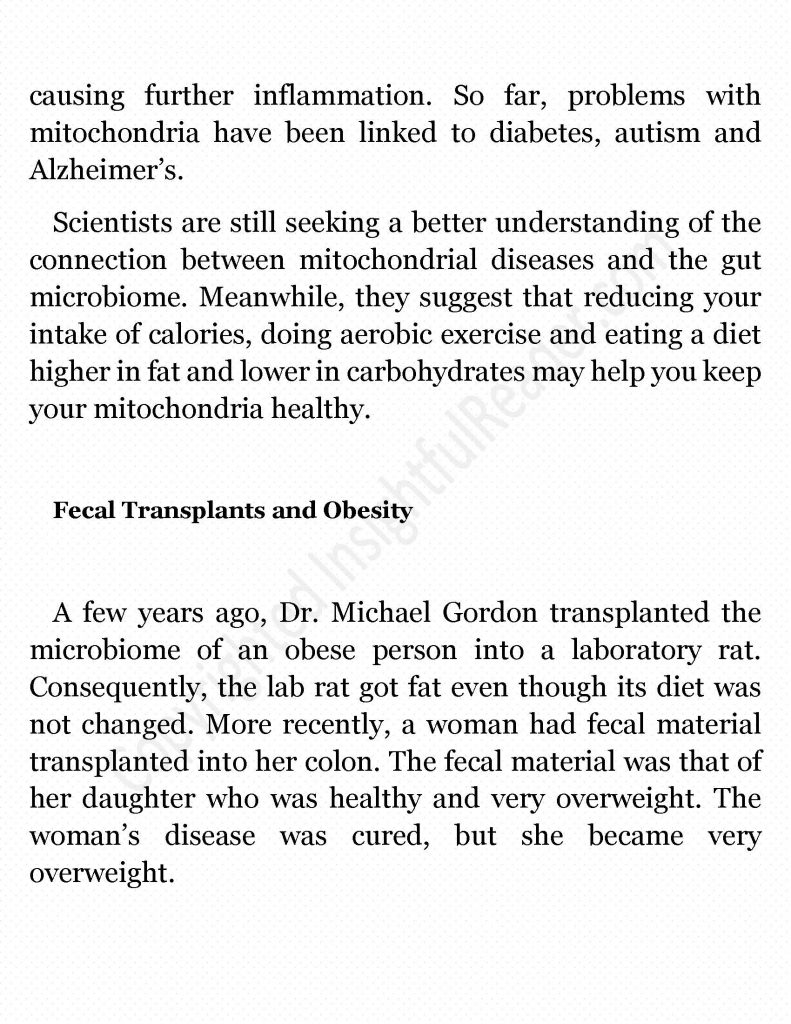 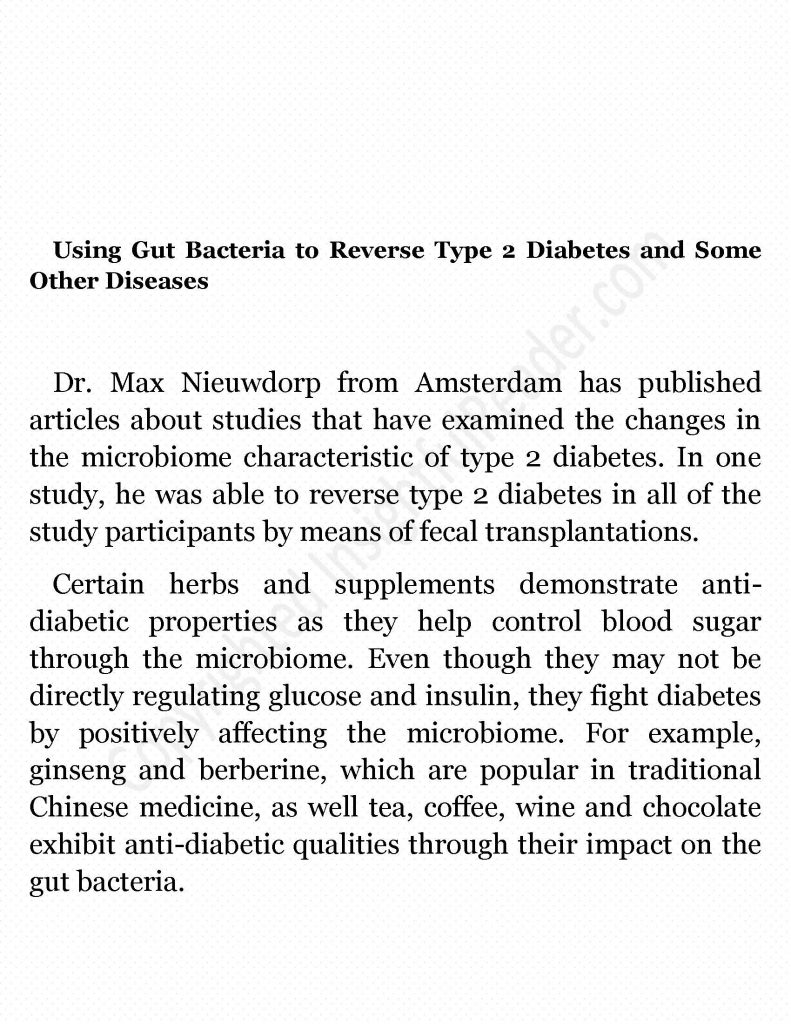 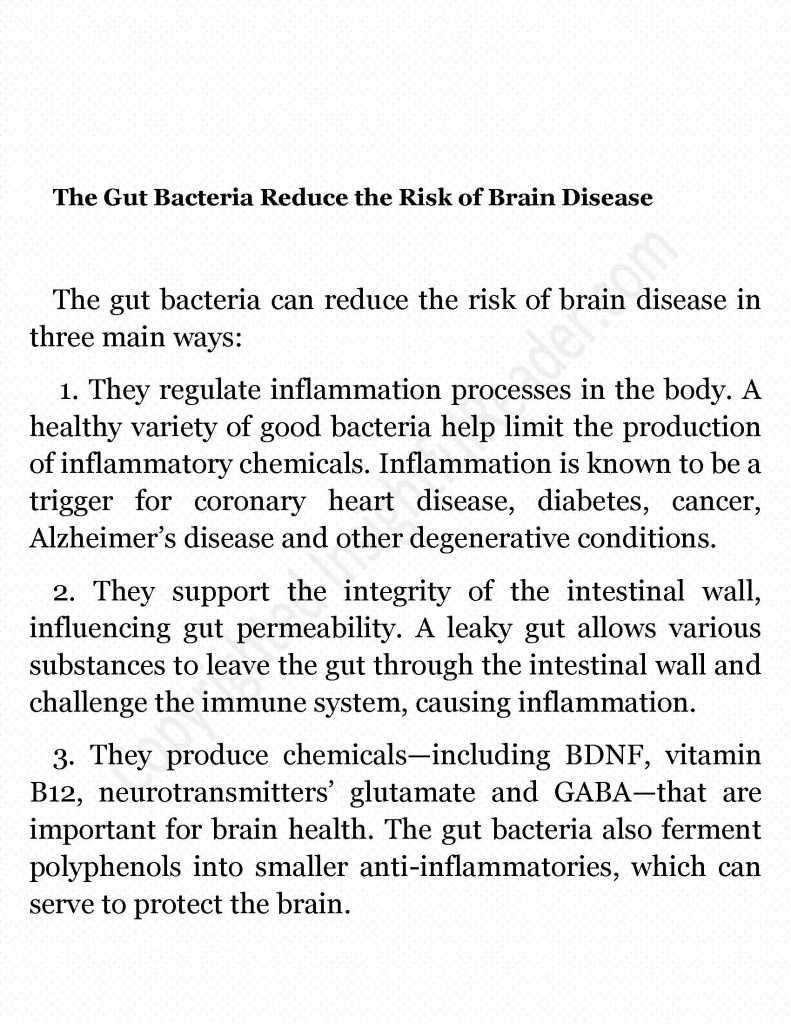 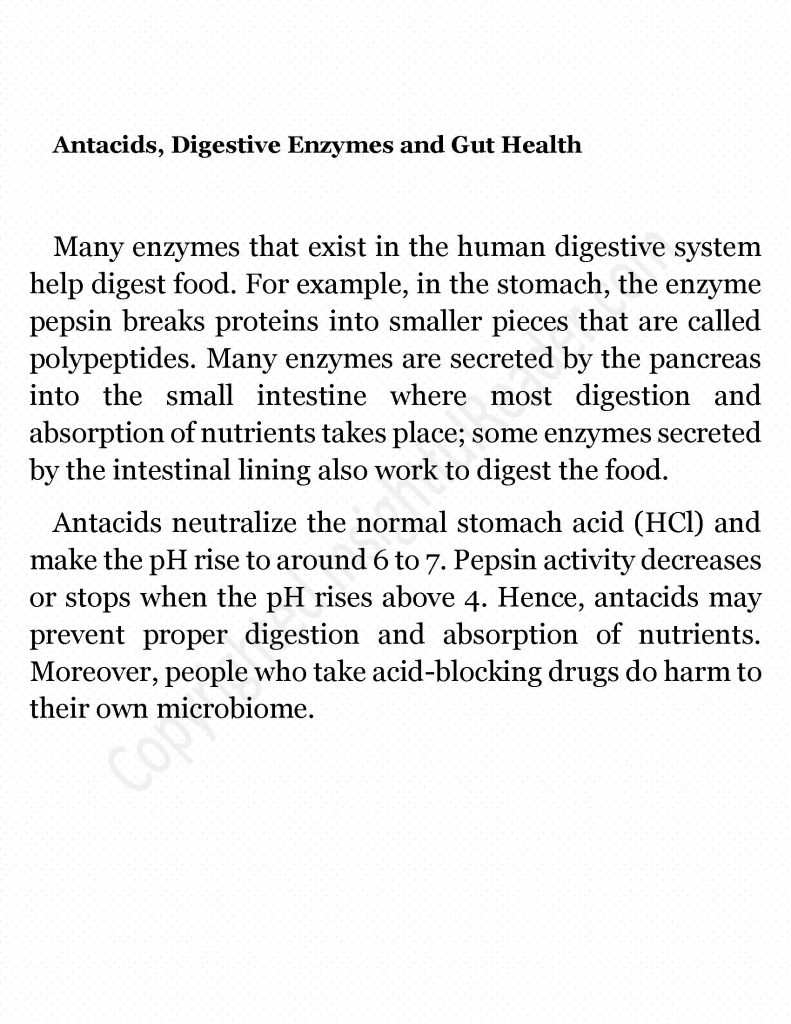 Go to Part II A Summary of Dr. Perlmutter’s Strategies

Go Back to Introduction and Overview