According to Greene’s First Law of Power, when you deal with people who are in positions of authority above you, you have to make them feel comfortable about their superiority. Most likely, they are aware of their imperfections and incompetence, and they become alerted when someone’s abilities and talents question their superiority. If you go too far trying to impress them and demonstrate your talents, you might end up making them feel threatened and insecure. If you make your superiors look bad, they can put their effort into making you feel miserable. Moreover, they can even destroy you. You will achieve the heights of power when you make your superiors look more brilliant than they are.

In his book, Robert Greene uses the story of King Louis XIV and his finance minister Fouquet as an example of how a person can jeopardize his or her career when ignoring the First Law of Power. In the 17th century, Nicholas Fouquet, finance minister of France, built a magnificent château on his estate and threw an extravagant party, boasting of his connections and charm. Fouquet’s actions offended his master, King Louis XIV, and the King found an excuse to get rid of Fouquet.

Galileo Galilei used the First Law of Power when he dedicated his discovery of the moons of Jupiter to the Medici family. He proposed that each moon represented one of the sons who revolved around the patriarch. Consequently, the Medici family appointed him as their official court mathematician and philosopher. This position provided Galileo with a more comfortable lifestyle and a secure income.

Analysis and Comments on the First Law of Power

In his book, Greene argues that it is tempting to think that interactions between superiors and their subordinates in our modern world are different from those that existed a few centuries ago. But even today, people who achieve a position of power also wish to feel secure and superior in their positions. If you make them feel threatened by your achievements and talents, they will use any opportunity to replace you with someone less talented and less threatening to them.

According to Greene, the First Law of Power can be applied in practice by using the following techniques and strategies:

The following ideas, facts and comments go beyond Greene’s book and provide additional insight into the First Law of Power:

Even if you use sycophancy occasionally, you should remember that is not a good substitute for an integral character.

Law 2: Never put too much trust in friends, learn how to use enemies

According to Greene’s Second Law of Power, one must not put faith in friends. Friends are prone to envy, and they can betray you when they envy you. Friends tend to expect, ask and even demand too much from you because of your friendship. If you hire your enemy, he or she will be more loyal to you than your friends, having the need to prove himself or herself. You should be afraid of your friends more than your enemies. If you don’t have any enemies, then put an effort into making some enemies.

In his book, Robert Greene refers the story of Michael III of the Byzantine Empire and his friend, Basilius, as an example of how a person can jeopardize his or her life when ignoring the Second Law of Power. In the mid-9th century, Basilius, a horse trainer, saved Michael III’s life from the attack of a wild horse. Michael III expressed his gratitude by raising Basilius to the position of head of stables, giving him many presents and doing him many favors. But Basilius became very greedy. His desire for more wealth and power became so great that he had Michael III murdered.

On the other hand, Emperor Song used the Second Law of Power in his favor. In 959 A.D., General Zhao Kuangyin became Emperor Song. He realized that his friends in the army and in the government would destroy him, continuing a pattern of violence and bloody overthrows. To avoid such a sad fate, Emperor Song convinced his generals to retire. He spared the lives of those people who conspired against him and he won over his enemies with his generosity. As a result, the Song Dynasty ruled China for more than three centuries.

Analysis and Comments on the Second Law of Power

According to Greene, the Second Law of Power can be applied in practice by using the following ideas:

The following ideas, facts and comments go beyond Greene’s book and provide additional insight into the Second Law of Power:

Step 3: Rely on rationality. You have to convey to your rival the expectations of the relationship that you have created with him or her. In this way, your rival will not be second-guessing your intentions while remaining in his or her adversarial state. 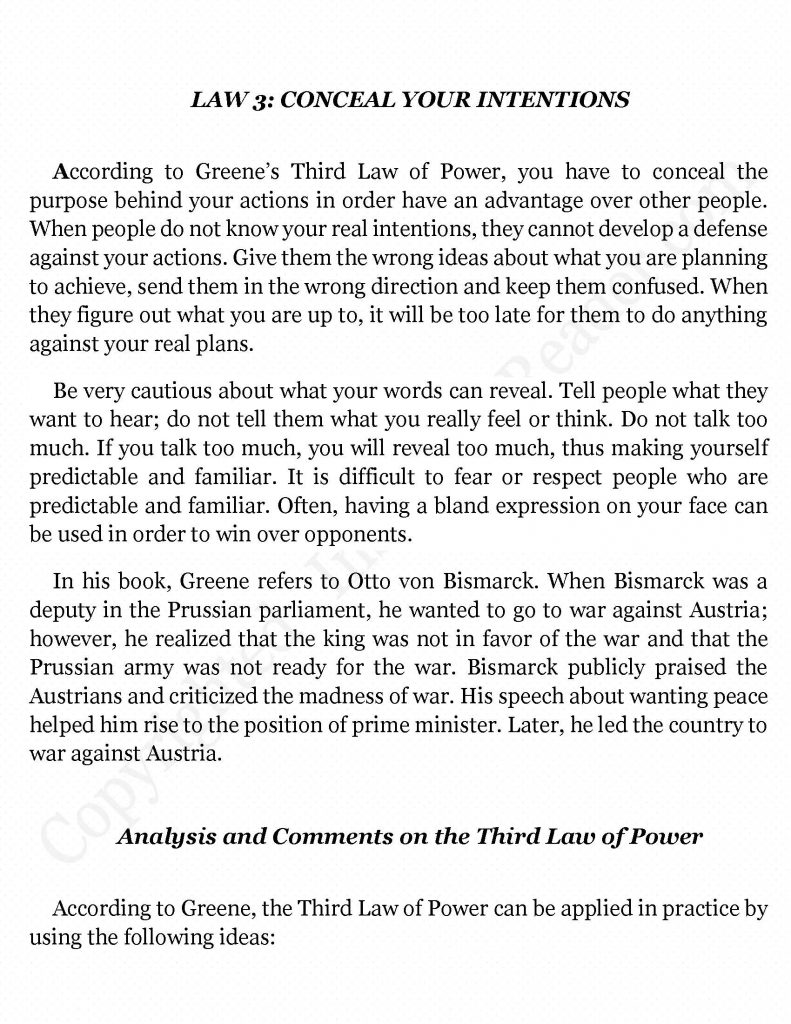 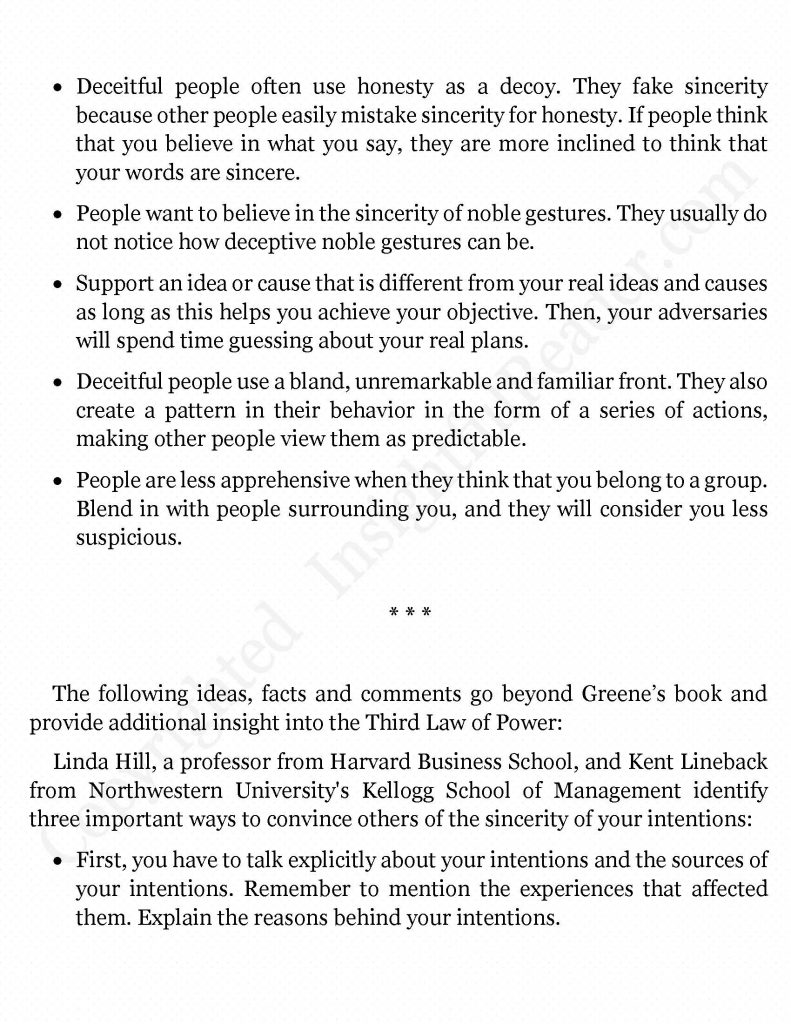 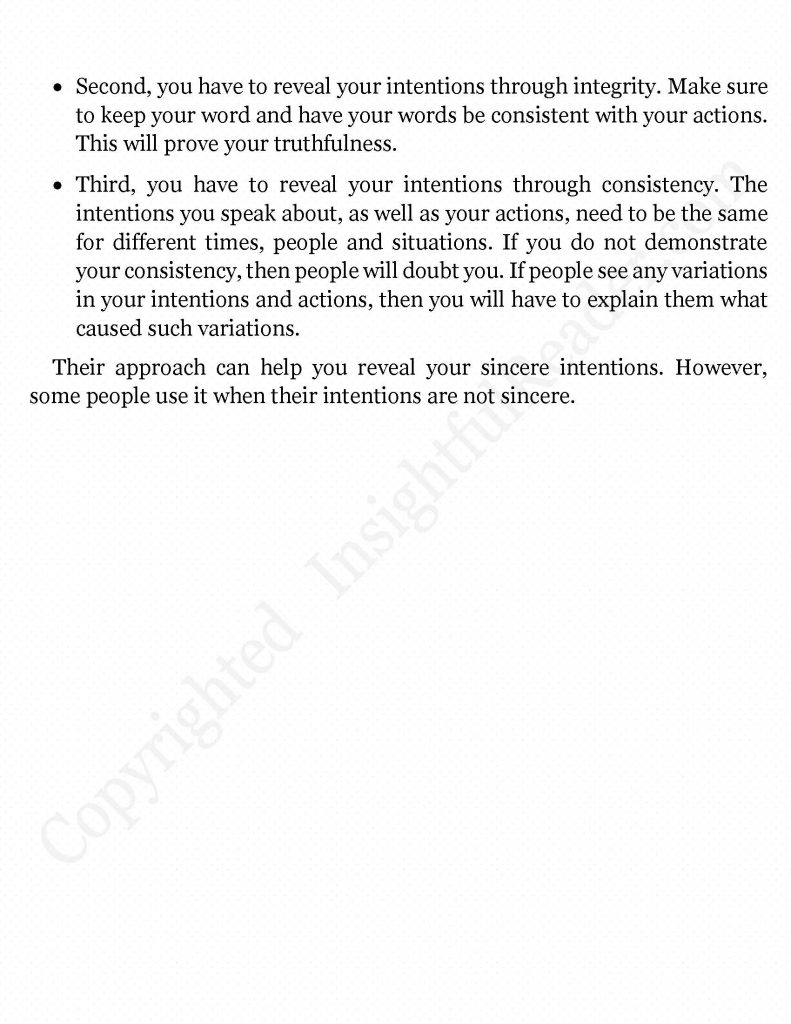 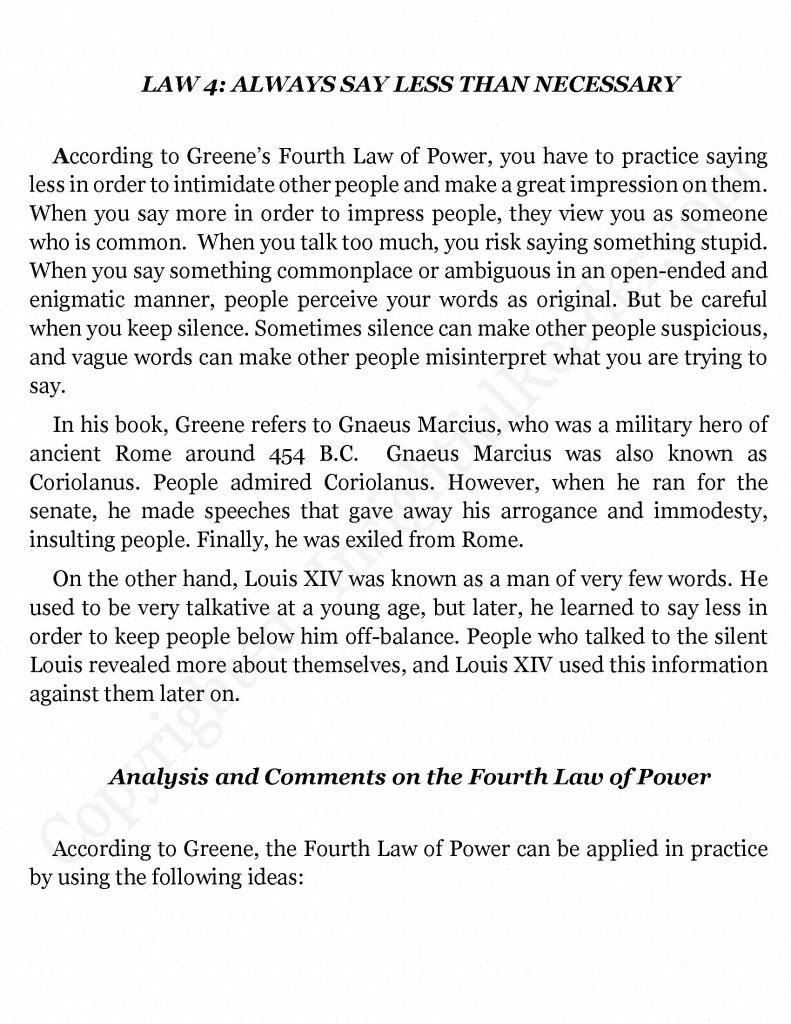 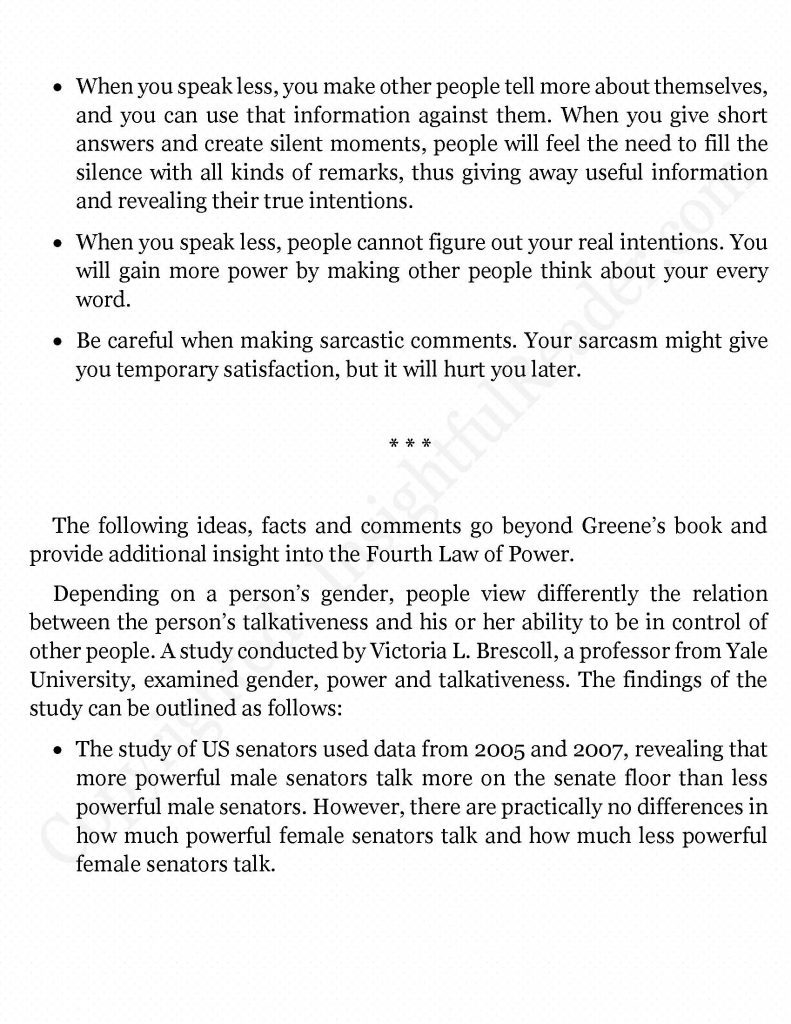 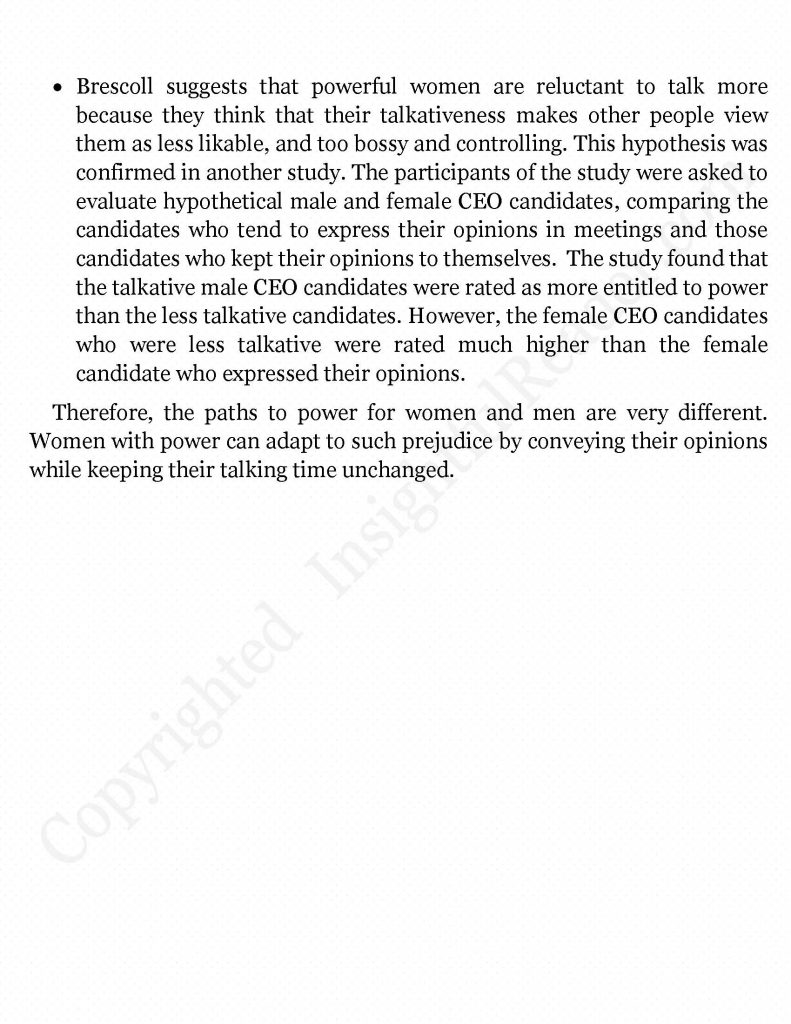 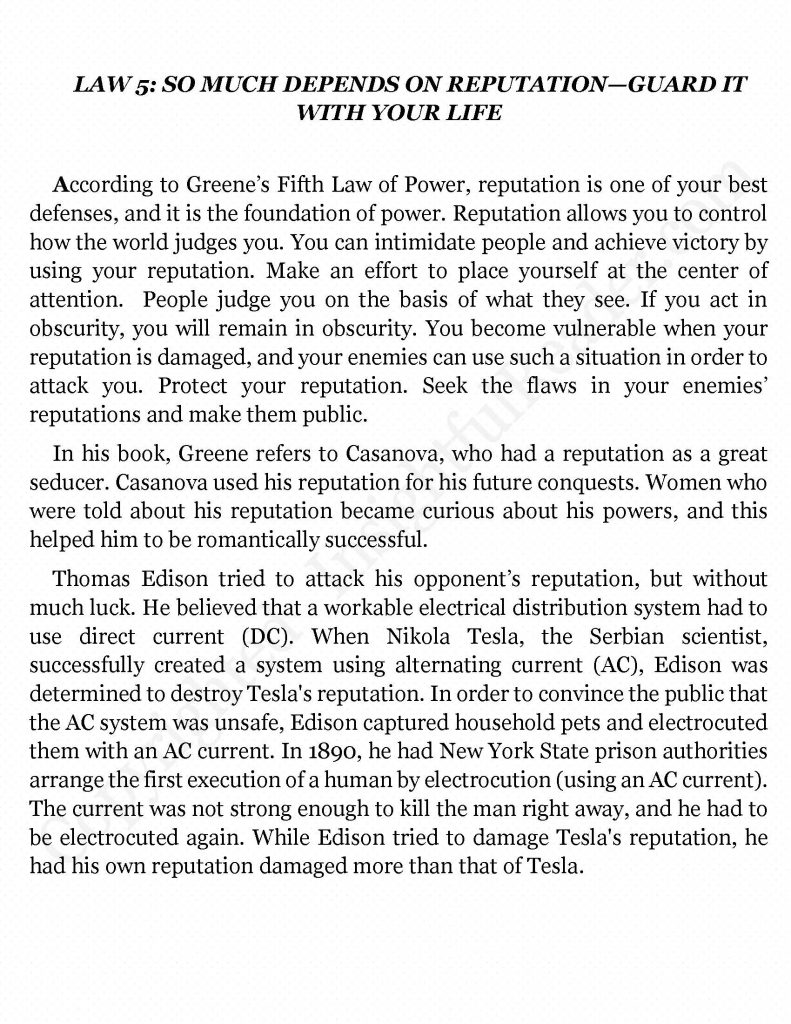 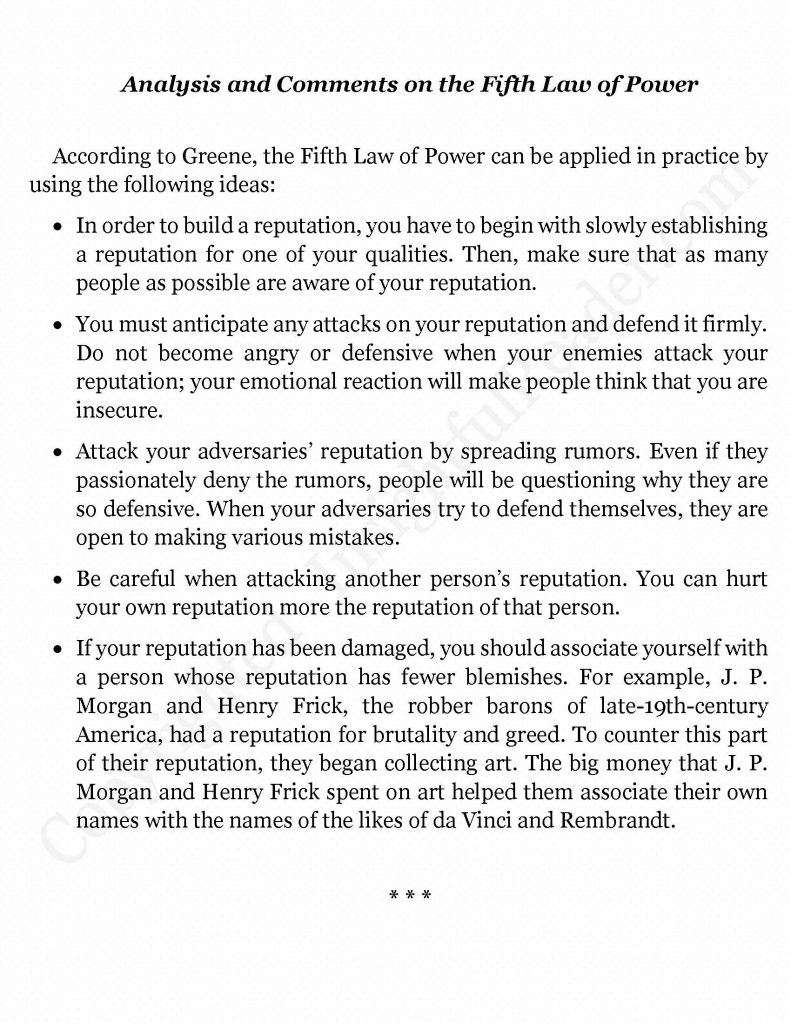 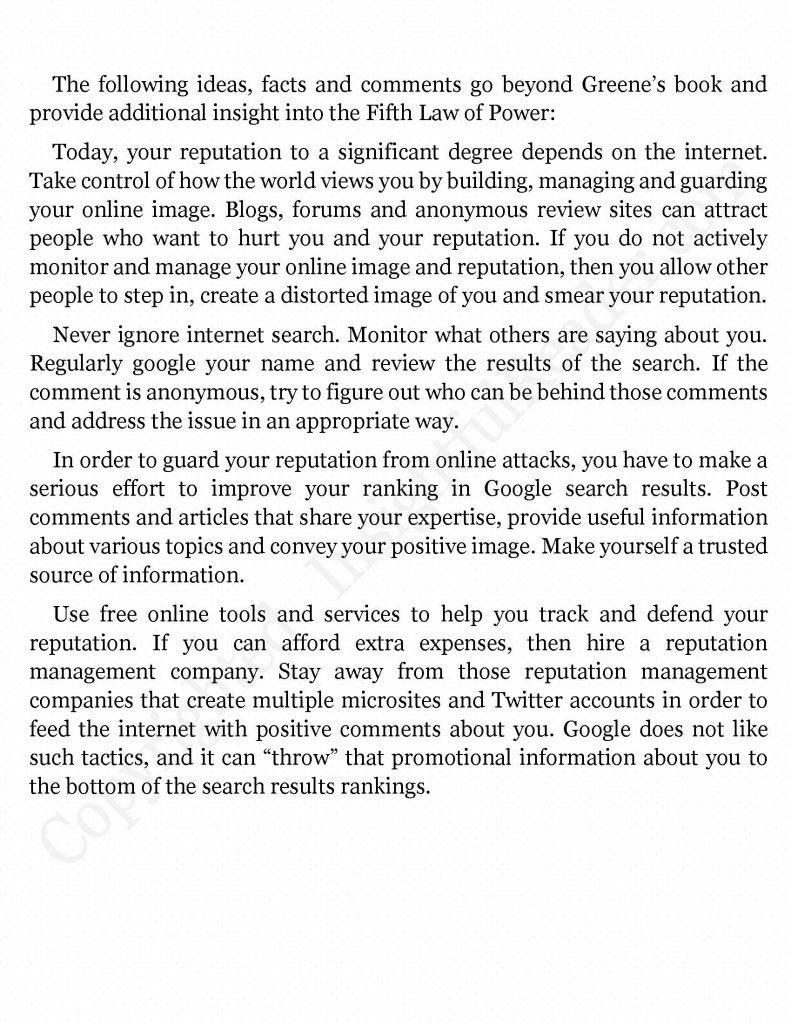 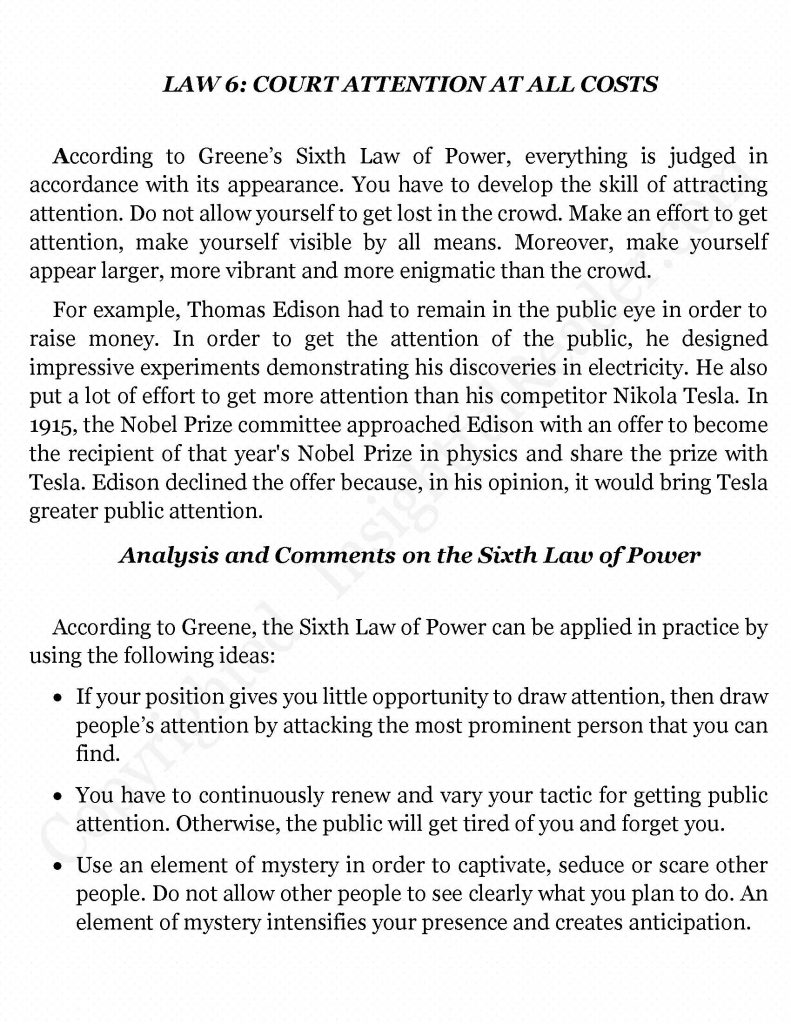 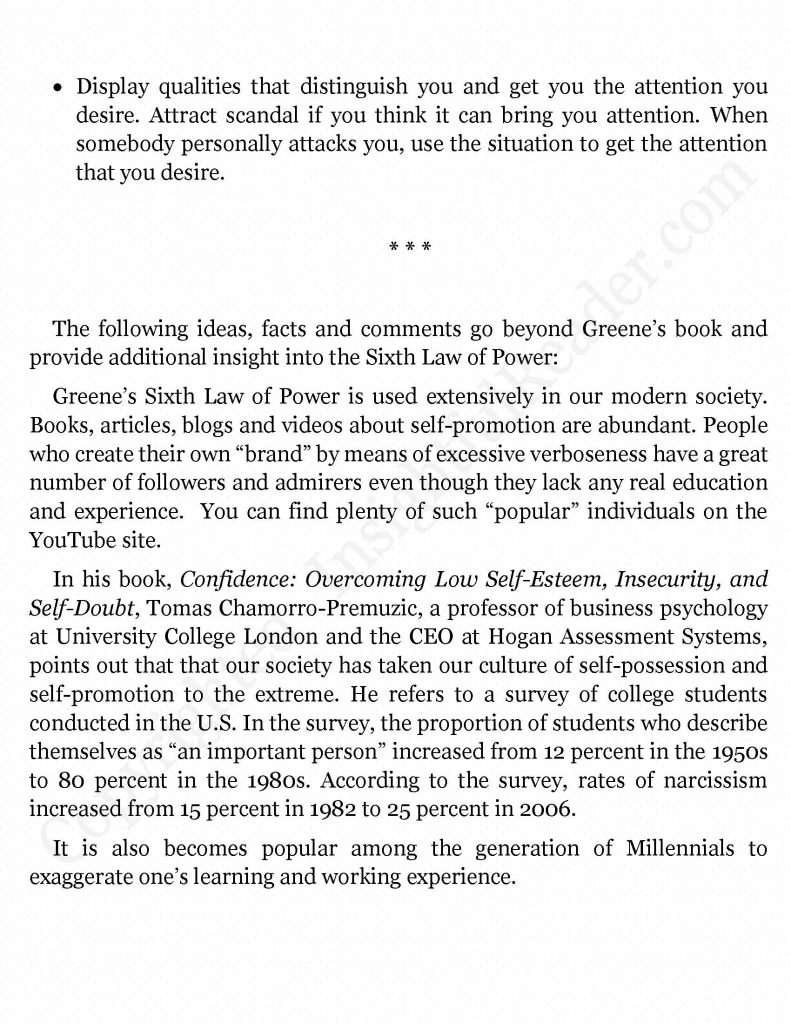 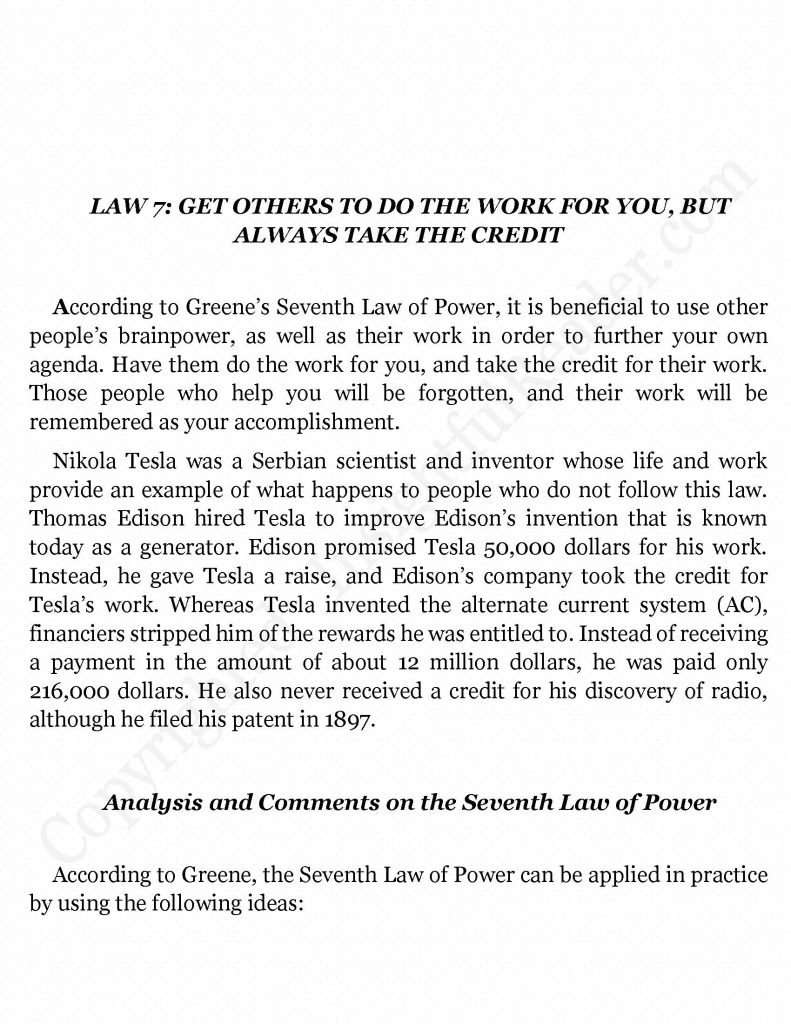 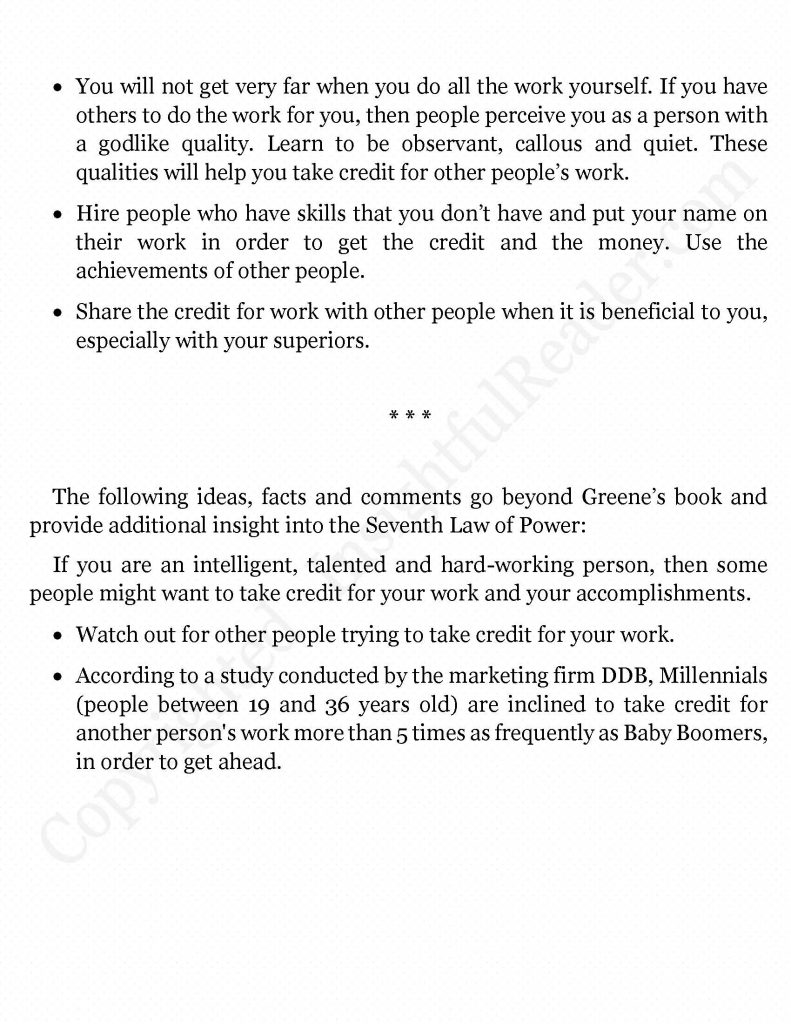 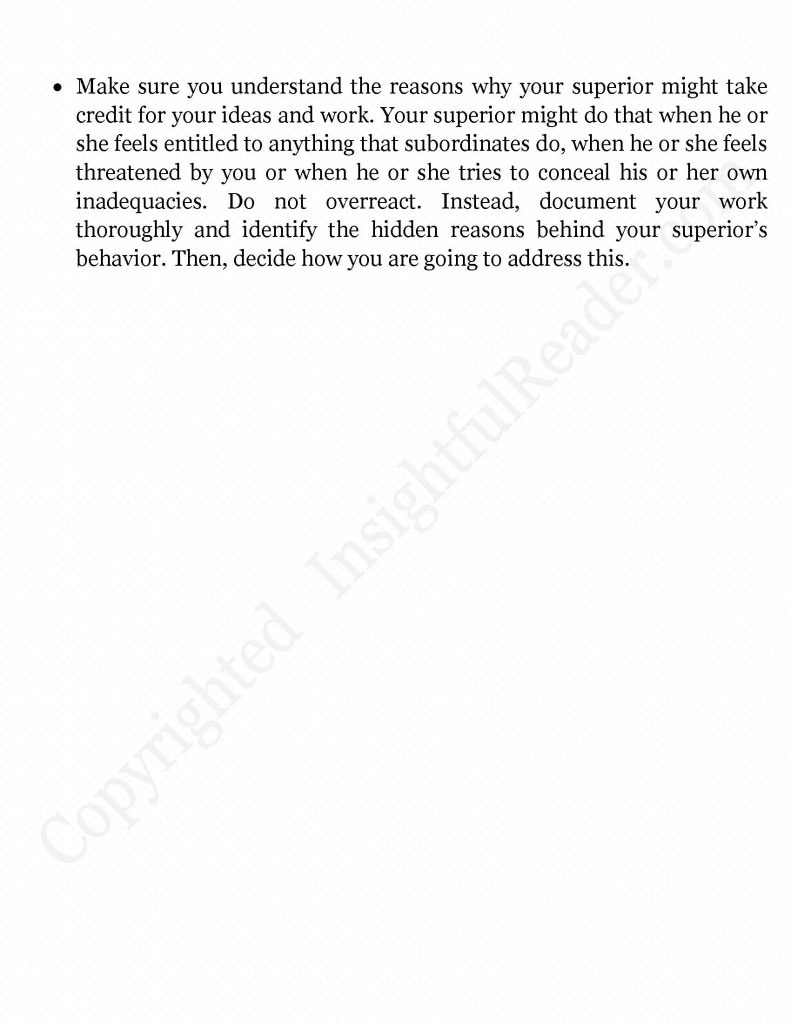 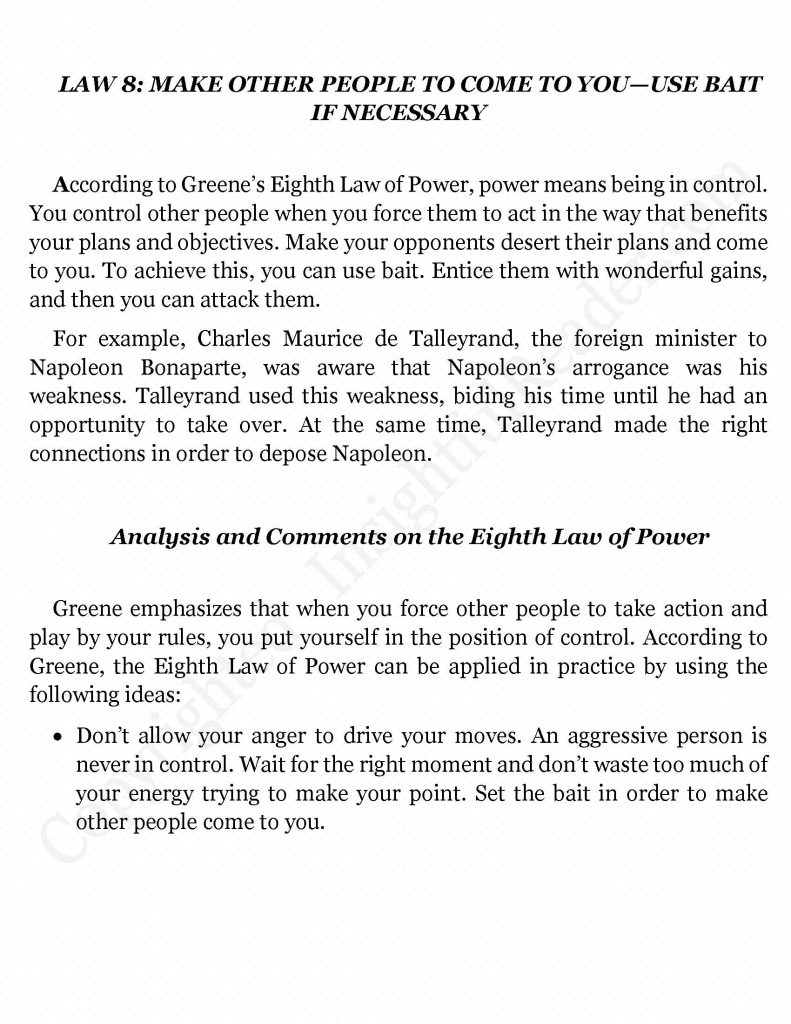 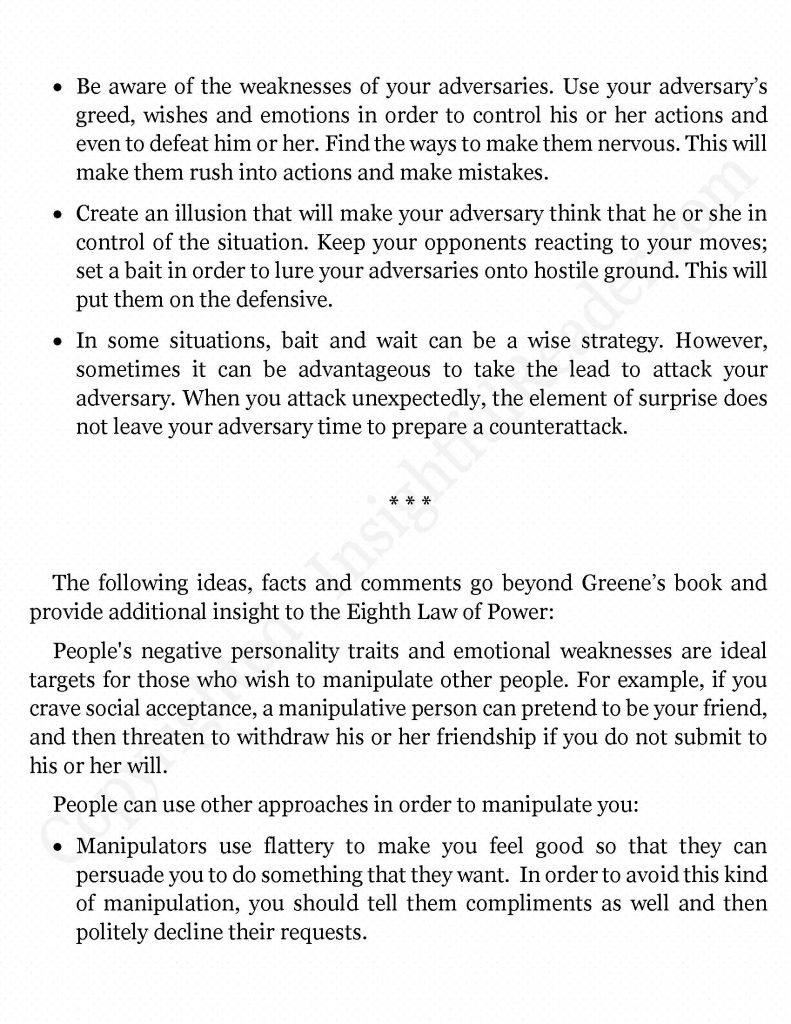 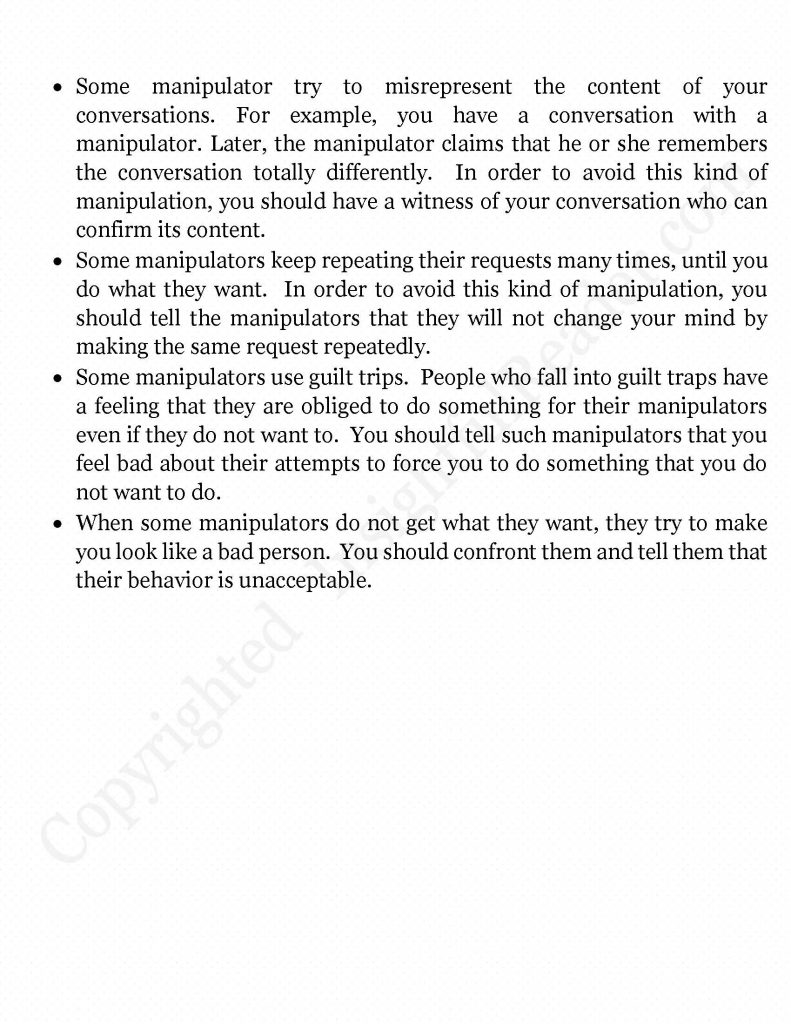