Capital in the Twenty-First Century –

How Piketty is Right and Wrong

Copyright©2014 I.K. Mullins. All Rights Reserved. No part of this book may be reproduced or retransmitted in any form or by any means without the written permission of the author.

PART I. WHERE WE ARE: AN UNOFFICIAL SUMMARY OF KEY FACTS SUPPORTING PIKETTY’S IDEAS IN HIS BOOK, CAPITAL IN THE TWENTY-FIRST CENTURY


Thomas Piketty is well known as a researcher of income concentration. He uses fiscal sources in order to document the rise (before World War I), the fall (between 1918 and the second half of the 1970s) and most recently again the increase in the share of the top income groups in France and other countries. Piketty uses fiscal data rather than household surveys, and he focuses on top incomes. Such a focus makes economists and the general public more aware of the rich, their income levels and their share of total income.

The importance of the research conducted by Piketty and his colleagues has also been supported by a focus of both public and research interest on inequality and by recognition of the fact that in the United States median incomes have been stagnant for almost 40 years while the top 1 percent of the population—or even more narrowly the top 0.1 percent—has drastically increased its share of total income.

Piketty’s book discusses these issues of income concentration more openly than ever. In his book, Piketty has provided a new and astonishingly rich framework that identifies rising inequality as an essential element of modern capitalism.

Piketty’s book is divided into 4 parts and 16 chapters.

Piketty’s book covers nearly three centuries of empirical data on capital and output, the rate of return on capital, national income distributions, inheritance flows, inflation, etc. for France, the UK, the US, Canada, Germany, Sweden and Japan. It deals with a vast range of data: from the percentage of the French population with the right to vote during the Bourbon Restoration to up-to-date incarceration rates in the US; from the exchange rate of the livre tournois (one of numerous currencies used in France in the Middle Ages) to the 2013 Cyprus financial crisis; from the capitalized values of slaves in the US to private foreign holdings in modern China.

Piketty’s 650-page book is accompanied by a huge set of data, which is available online at: http://piketty.pse.ens.fr/fr/capital21c.

Piketty’s book, Capital in the Twenty-First Century, turns public attention to worrisome long-term trends in economic inequality. Piketty and his associates, including Emmanuel Saez, a French economist and a Professor of Economics at the University of California, Berkeley, and Anthony B. Atkinson, a British economist and a Professor at the London School of Economics, have compiled a huge database that provides the empirical foundation for Piketty’s argument.

Here, we briefly summarize the evidence Piketty presents in order to explain his thesis. We group important facts that back up Piketty’s ideas in the way that further supports our critique of Piketty’s book:

According to the data gathered by Piketty, the partnership of wealth and income inequality is not accidental. It is an essential feature of capitalism. Income is a flow. It can grow and change. Capital is a stock; its wealth comes from what has been accumulated in all prior years. The rate of return on capital includes profits, interest, dividends, rents and other income from capital.

Piketty’s research reveals that wealth will concentrate if the rate of return on capital is greater than the rate of economic growth. During periods of modest economic growth, such as the one that many Western countries have experienced in recent decades, income tends to shift from labor to capital, and enormous wealth is produced for a small number of people while the majority of people have difficulty making a decent living.

A lesson can be learned from Balzac’s story, Le Père Goriot, published in 1835. In the novel, the characters’ reasoning is as follows: one should do anything to get their hands on capital even if it requires going against moral values. The same ideas were presented in Jane Austen’s novels, as well as in Margaret Mitchell’s Gone with the Wind.

According to the data gathered by Piketty, capitalism cannot solve the problem of wealth and income inequality, and this problem gets worse in capitalist economies.

Piketty refers to the ratio between capital and the annual total income flow as the ratio β. It depends on the savings rate (s) and the growth rate (g):      β = s / g.

According to historical data gathered by Piketty and his colleagues, β follows a U-shaped curve: β reached a value of approximately 7 in France and the UK before World War I; during the next 50 years, it decreased by about 50 percent in Europe (including the UK) and it decreased to less than 4 in the United States; it has increased during the past 30 years. This trend applies to all advanced capitalist economies. 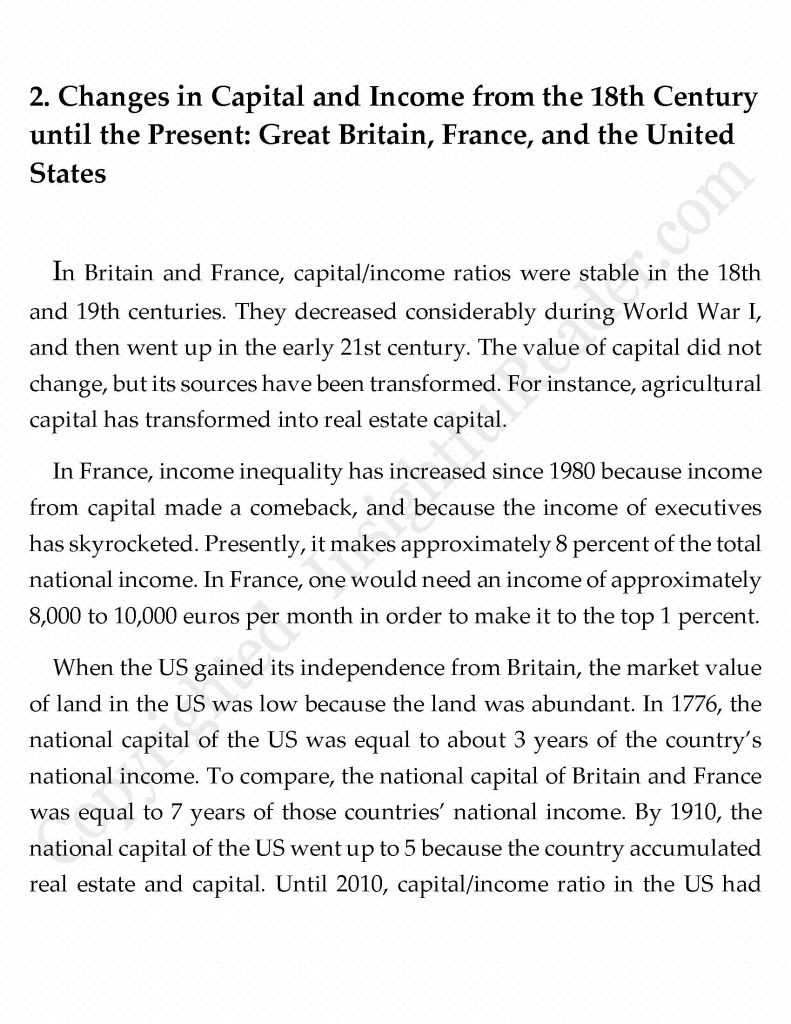 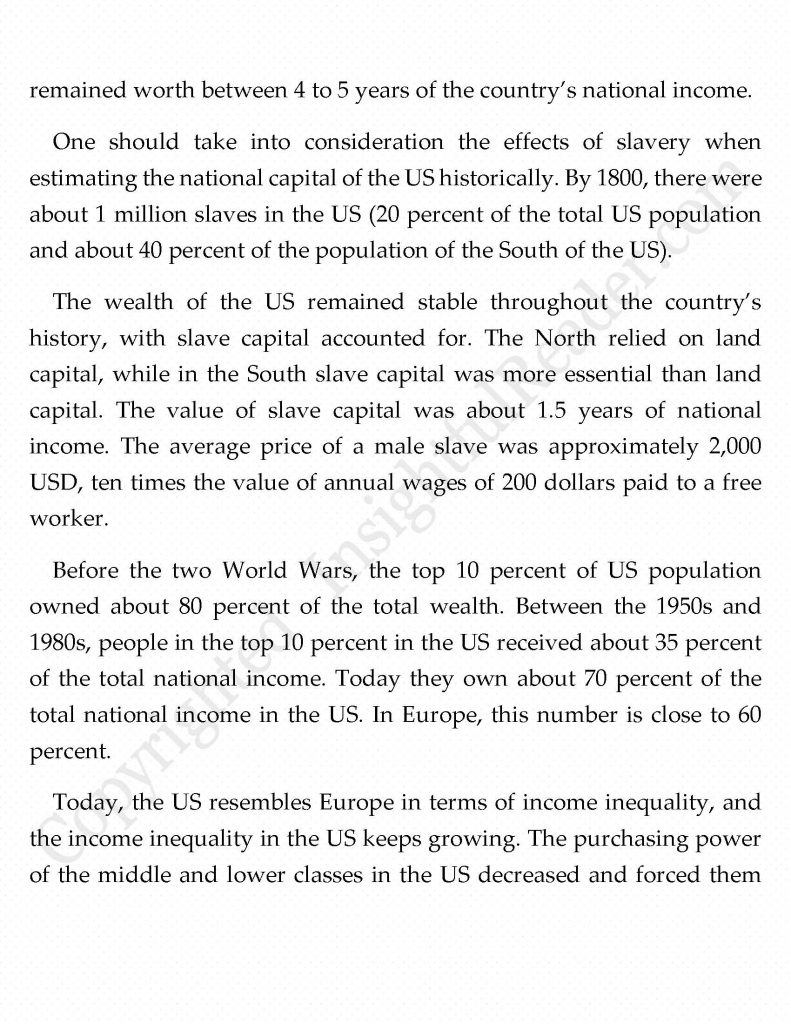 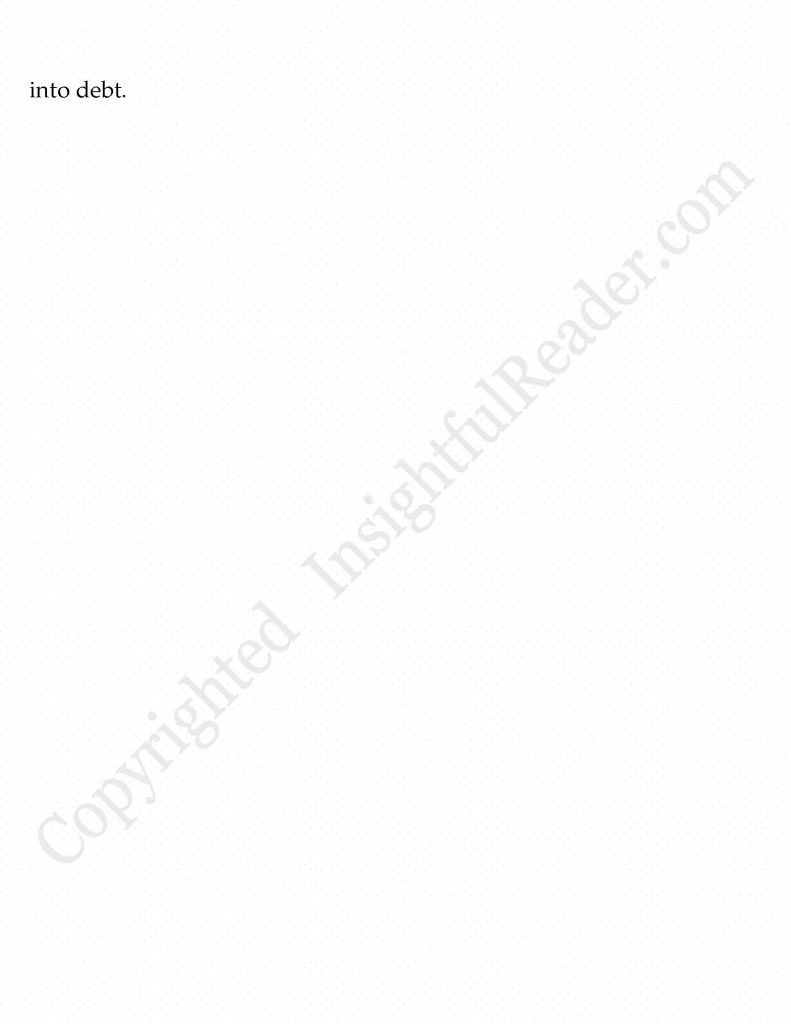 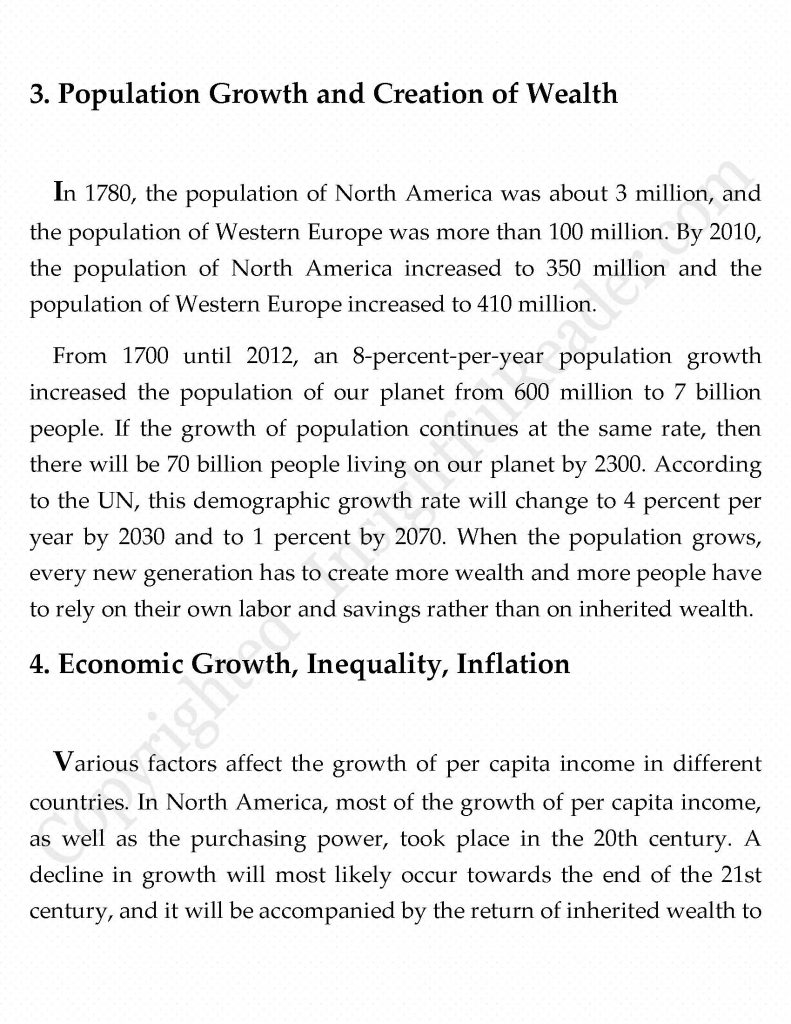 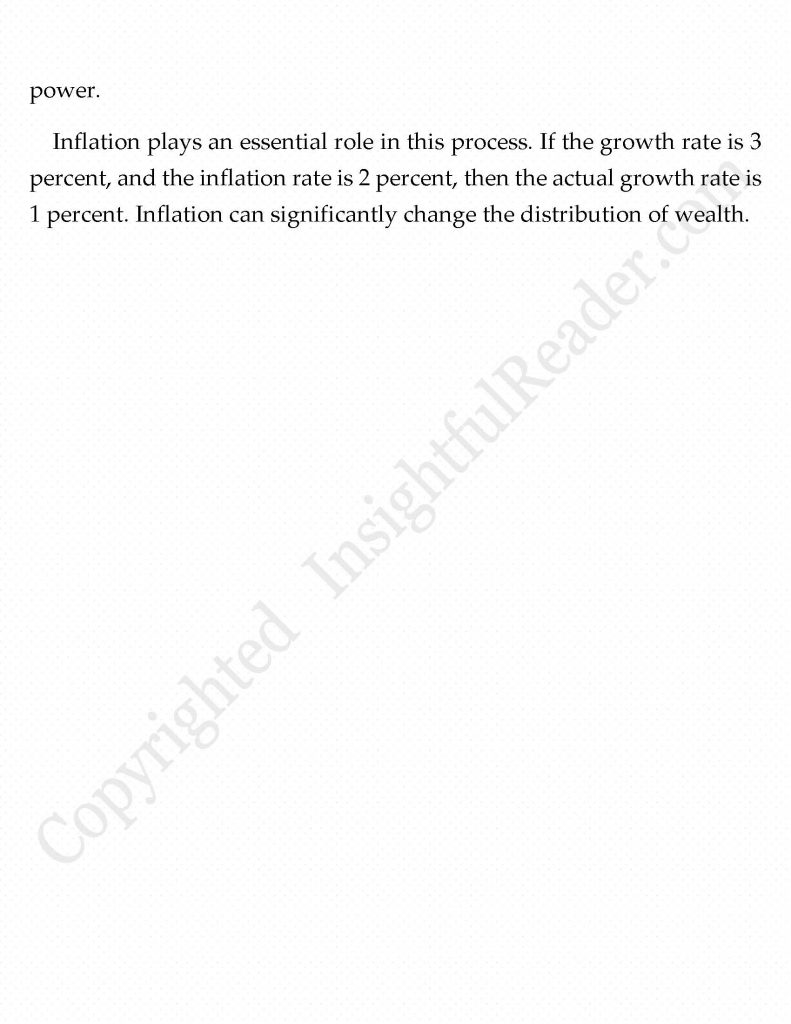 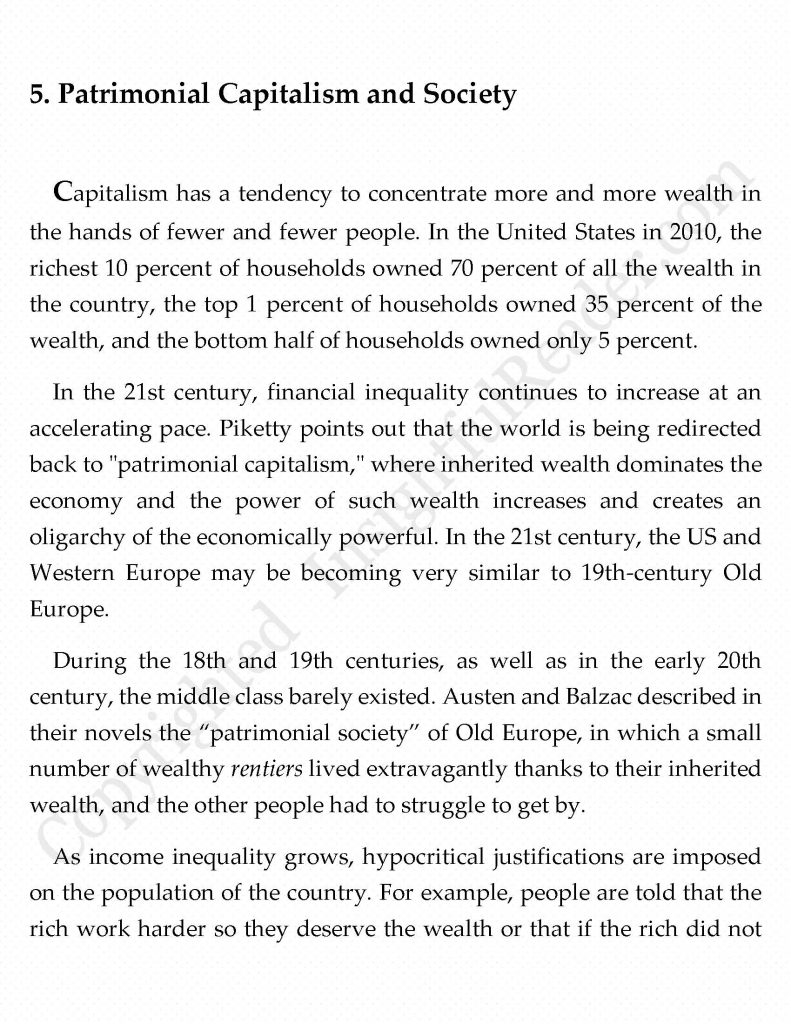 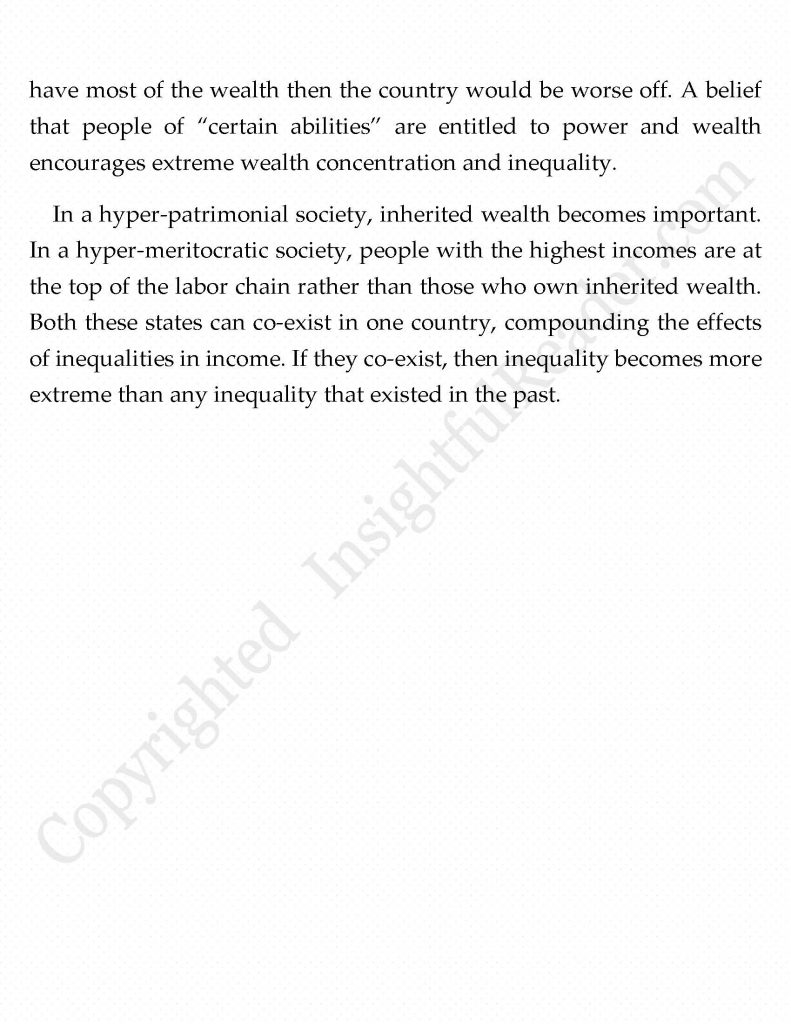 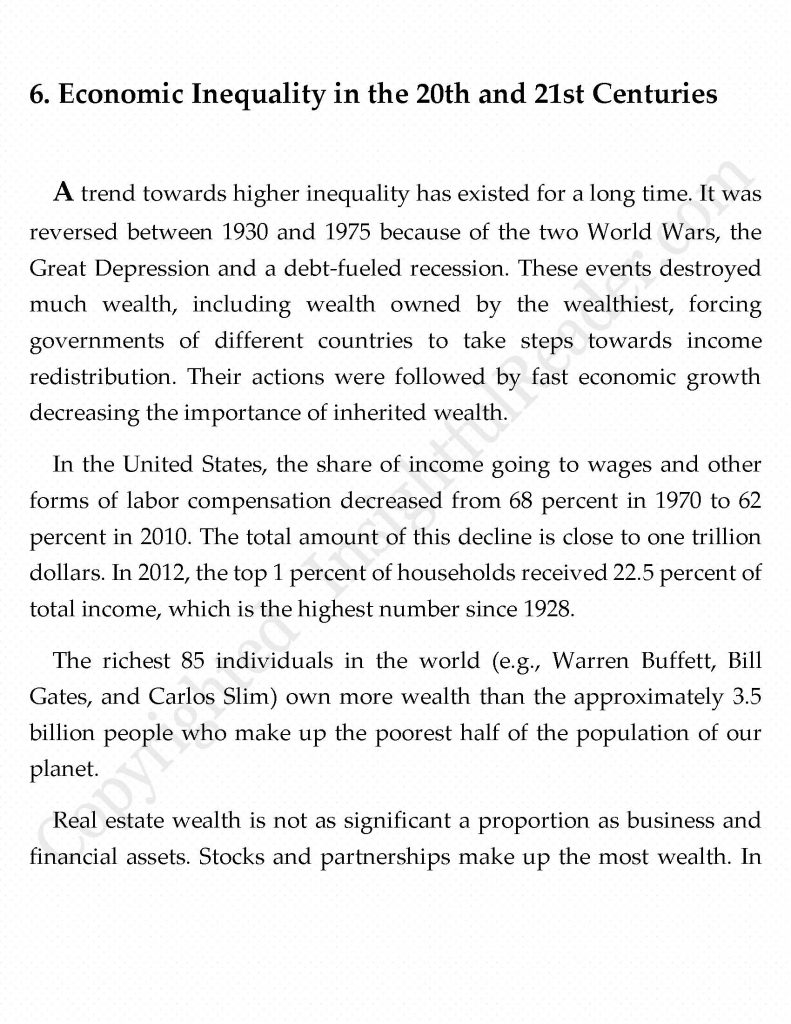 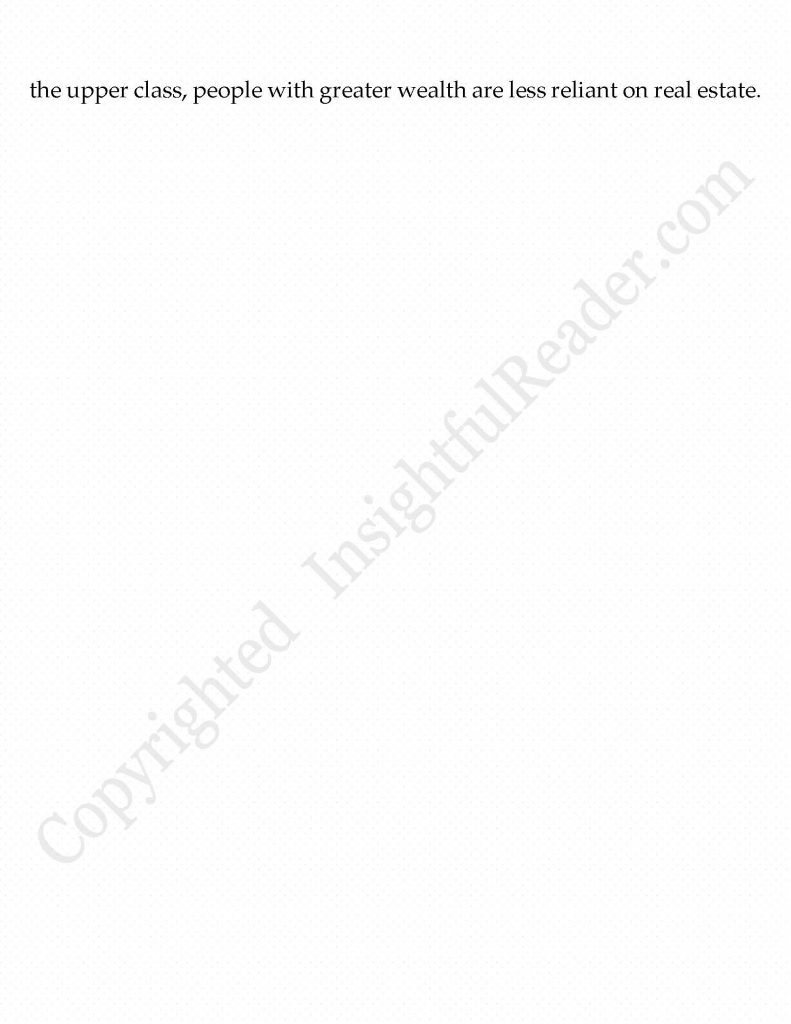 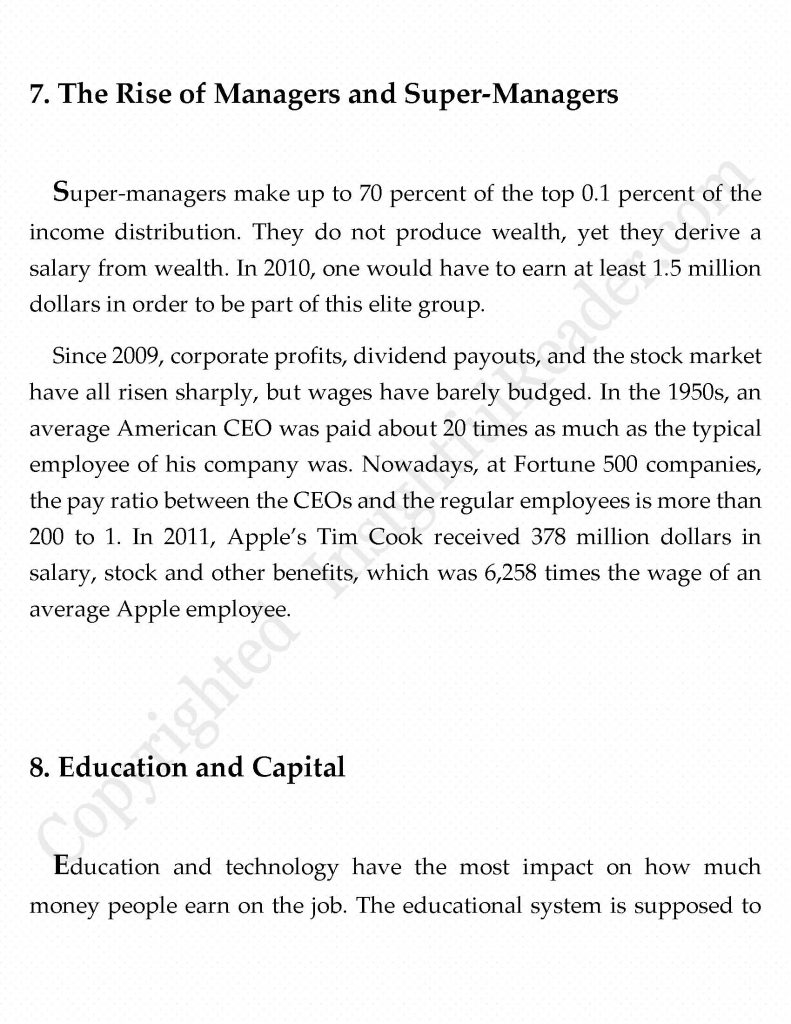 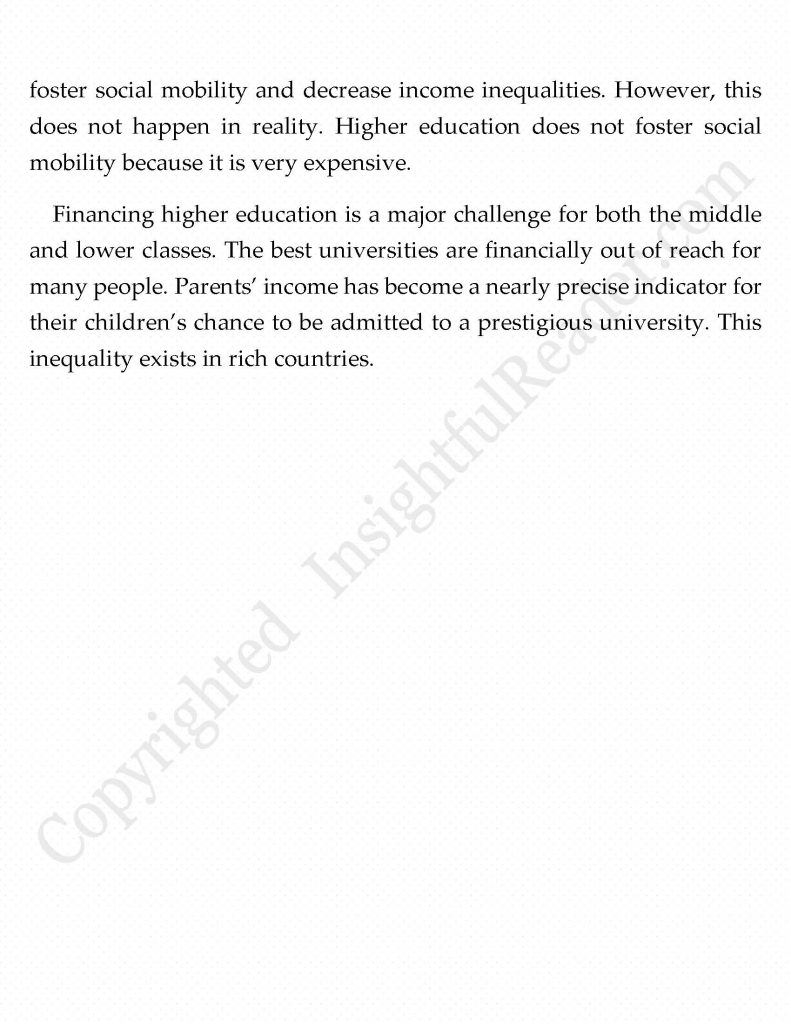 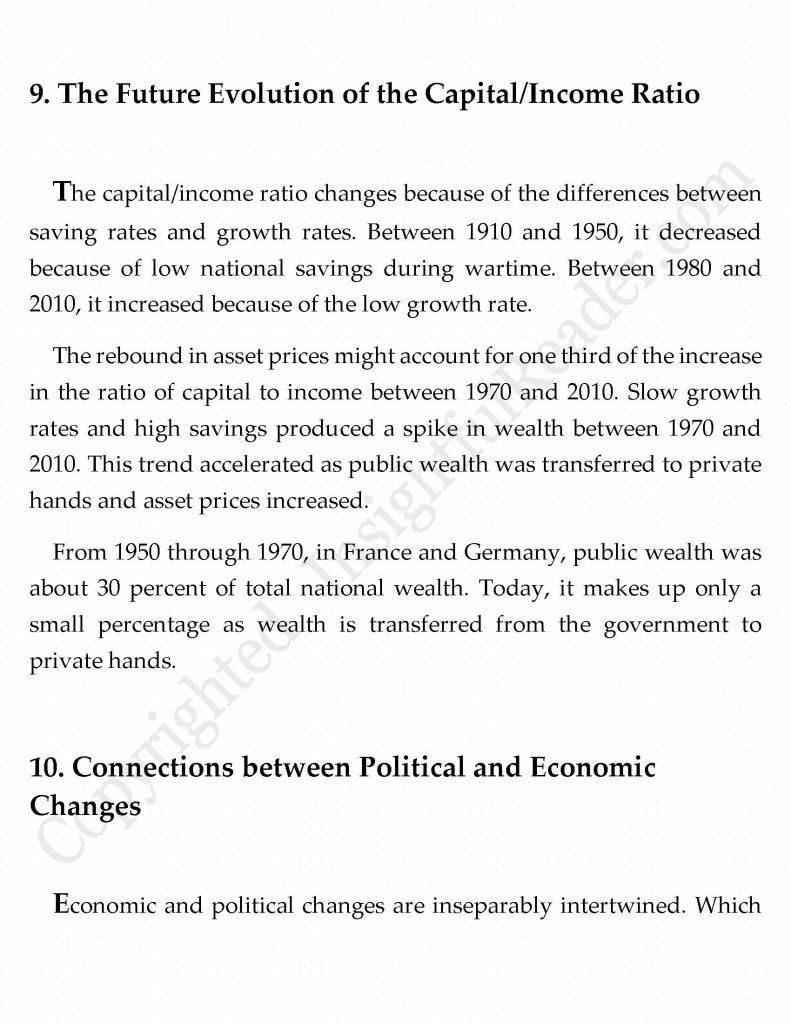 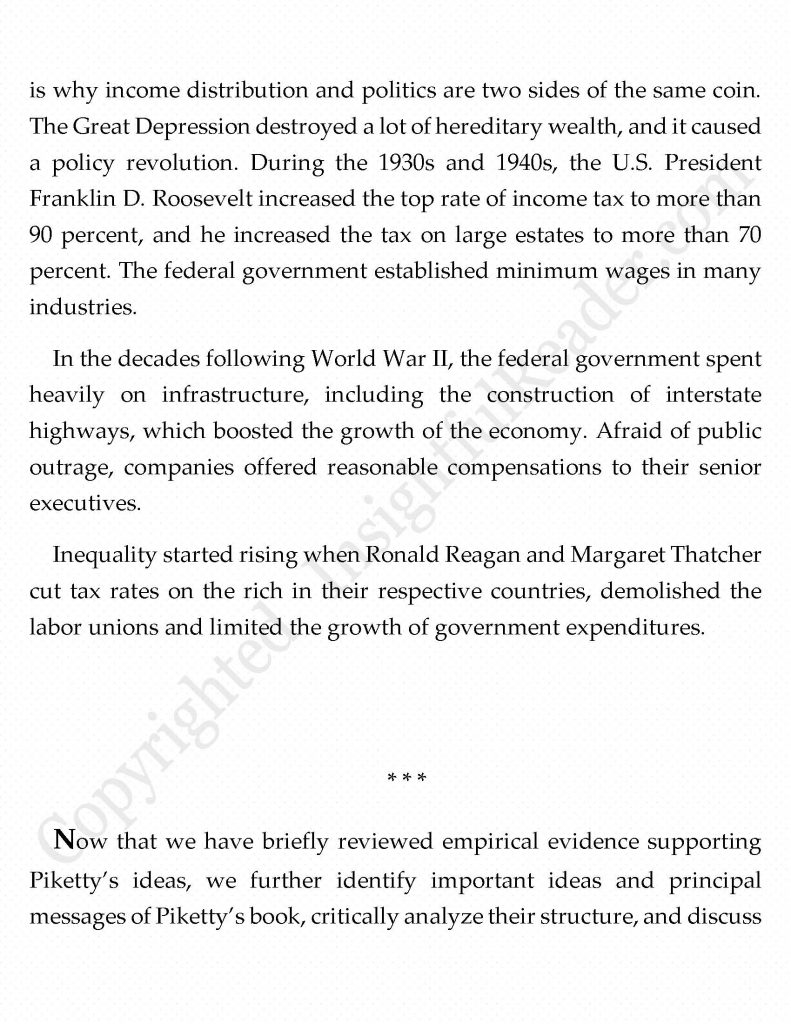 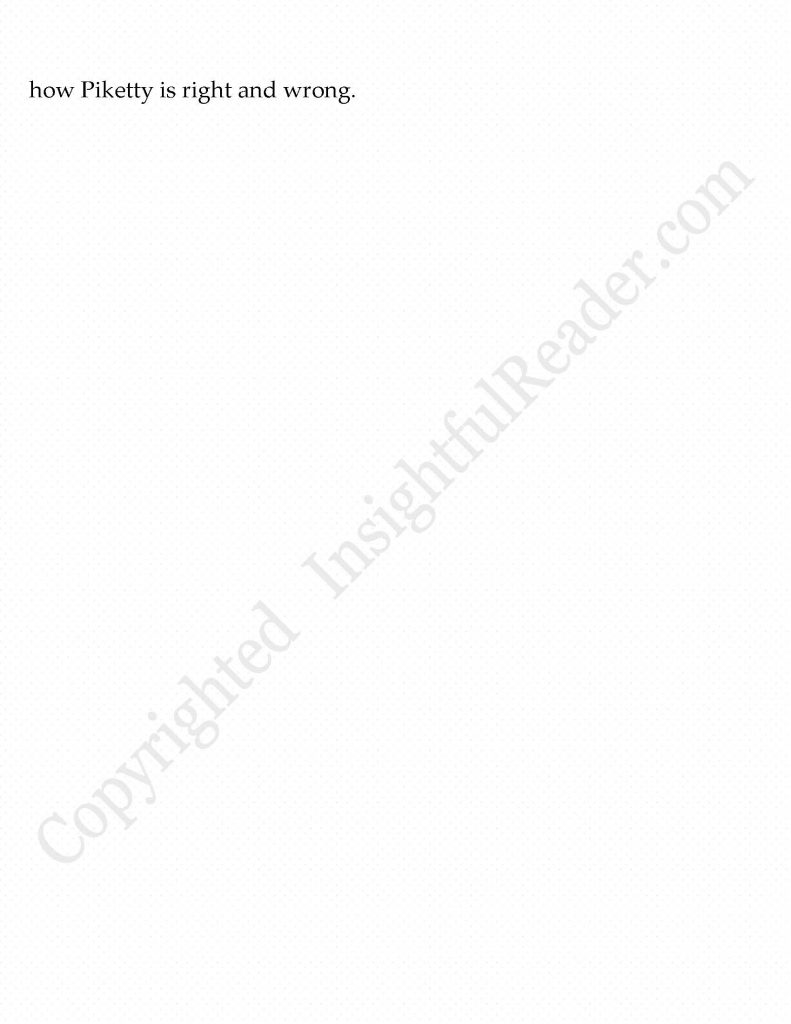 Go Back to Introduction